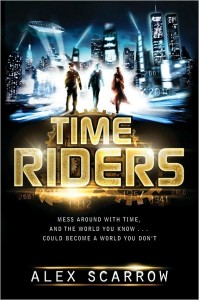 In 1912, Liam O’Connor is rescued from certain death as the Titanic sinks. In 2010, Maddy Carter is snatched away from an airplane just before it crashes. In 2026, Saleena Vikram is taken away from a fatal fire. All three teenagers have just been recruited as the next set of operatives for the TimeRiders. Their mission: to live just outside of time, in order to spot temporal disturbances and prevent changes to history. With Saleena as the observer, Maddy as the analyst, and Liam as the field operative, they’re tasked to do the impossible every day. Trained by Foster, only survivor of the last team, and backed up by Bob, a vat-grown humanoid with a computer brain, they’ve barely settled into their new assignments when history is changed in a major way.

Now they have to defeat a time-traveling madman who altered the outcome of World War 2 for his own benefit before painstakingly obscuring his tracks. With the team scattered across decades, rapidly running low on resources, they’ll be tested like never before. But history’s not done changing, and with each shift, things get much, much worse. If they don’t succeed, humanity will have no future.

TimeRiders ia a fast-paced, intense adventure that hits the ground running and never looks back. Obviously, mixing time travel with alternate World War 2 scenarios is nothing new, but in this case, it still serves as an adequately entertaining launchpad for an exciting story. I’ve always been a sucker for good time travel adventures, and this one delivers in full, with action-packed scenes set over multiple decades. From the war-torn past to the apocalyptic future, there’s plenty going on here. I’ll be interested in seeing what sort of adventures our heroes get into with future installments.