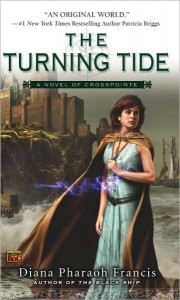 In Crosspointe, there’s no odder group of friends than the trio of Ryland, Shaye, and Fairlie. Ryland, son of Crosspointe’s king, has spent a lifetime trying to live up to his father’s expectations, and would do anything for king and country. Sheye, scion of the powerful Weverton family, is a majicar, capable of weaving magic to great effect. However, he’s no friend of the crown or what it represents. Fairlie has dedicated her life to shaping metal and creating works of art. And even as she achieves her life’s dream of becoming a master in the Metalsguild, she realizes her heart may have room for more than just metal, when Sheye finally admits his love for her.

And then they are betrayed, the trio’s friendship irrevocably destroyed. The king has ordered his son to commit an unthinkable, unforgivable crime in service to Crosspointe, and that one act sets off a chain of cataclysmic events that will reshape Crosspointe forever. The crown needs a majicar capable of shaping the deadly sylveth into compasses, in order to let ships safely navigate the Inland Sea and maintain the web of trade and treaties. But to create such a majicar, someone must be transformed, torn apart and reshaped by sylveth itself. That someone would never be human again. And sources indicate that Fairlie might just be the perfect candidate. But Ryland could never have predicted the consequences that arise as a result of imprisoning Sheye and transforming Fairlie. Now all of Crosspointe will pay in blood and tears, and it’s anyone’s guess as to what’ll be left standing afterwards.

Wow. Diana Pharaoh Francis really kicks over the apple cart in this, the third book of the Crosspointe series. Here we see the desperate lengths to which some people will go in order to achieve their supposedly noble ends, and we see the true cost of politics in Crosspointe. We see how people act with what they consider to be the best of intentions, knowing full well what they’ll endure as a result, and it’s not pretty. We see what some will do for love, and others for revenge, and it’s some pretty powerful storytelling. I was already a fan of the Crosspointe setting; it’s memorable and unique, with its nautical bent, political entanglements and pseudo-Victorian trappings, and we get to see even more of its darker side here. Likewise, the insights we’re granted into the true nature of majicars, sylveth, and the local gods really help to flesh out aspects previously left vague.

Just like in previous books of the series, Francis isn’t afraid to put her characters through the wringer, subjecting them to some intense experiences and trials by fire. I really found myself rooting for Fairlie and Sheye as, together and separately, they dealt with the problems at hand. Of course, there are some pretty cool and strange supporting characters present, one of whom ties this book in to events from The Black Ship. The more we see, the more it’s evident that the world of Crosspointe isn’t quite as easy to explain or understand as originally assumed. No, we’ve seen a small portion of a larger and wilder world. After what happens here, it’s clear that Francis has some big plans for her world, and I can’t wait to see what sort of consequences ripple out in books to come. Kudos to the author for creating an original fantasy setting, and using it to tell a series of stand-alone books that nevertheless build upon one another. It’s neither episodic nor epic, if that makes sense, and it comes as a breath of fresh air. With The Turning Tide, as with the other Crosspointe books, you’re getting a deftly-woven mixture of adventure, intrigue, magic and romance, and it’s hard to ask for much more. Don’t let the tide go out on this one.