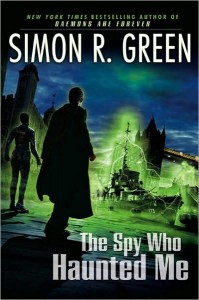 Eddie Drood, aka Shaman Bond, is back, and this time he’s about to meet the competition. Following the events of the Hungry Gods War, he stepped down from running the Drood family, content to once again act as a field agent, kicking ass and taking names in a never-ending quest to protect humanity from a host of terrors. For him, a typical day involves going undercover with a band of misfit mercenaries to prevent them from killing the ravens at the Tower of London, thus robbing England of its symbolic power. Little does he realize, upon the messy completion of that insane little job, that it’s just a warm-up for his next gig….

It seems that Alexander King, the notorious Independent Agent, greatest secret agent and adventurer of the latter half of the 20th century, is finally feeling his years and is ready to retire. And King wants to leave it all, his treasures and trophies and a lifetime of secrets, to one worthy individual. To that end, six have been chosen. The foxy Honey Lake, CIA operative. The treacherous Blue Fairy, representing the Fae Court of Shadows Fall. The beautifully exotic Lethal Harmony of Kathmandu (call her Katt). The unflappable Walker, famous for keeping peace in the Nightside, where anything goes and nothing is impossible. King’s own grandson, Peter, who’s graduating from industrial espionage to the big game. And Eddie Drood, representing the far-flung, obscenely-powerful, often-terrifying Drood family. Their mission: to investigate the truth behind five of the world’s greatest mysteries, and bring back proof. Winner take all, rules be damned.

The game will take them from the misty lochs of Scotland to the frozen wilds of Siberia, from the haunts of Bigfoot to the shores of Faerie, from the peaks of the Swiss Alps to the deserts of the American Southwest. But the secrets they’re disturbing were buried for a reason. Who will be the first to fall in this deadly game, and who will be the last man or woman left standing? Think you know the answers? Think again; in the world of a secret agent, everything is suspect. Game on.

Ah, Simon Green. With just a fraction of the insane energy and mad glee he throws into any one of his books, I could rule the world. Here’s an author who’s not afraid to cut loose, kick over the speakers, and throw himself off the stage in a moment of passion. Part of why I keep coming back for more is because I know exactly what sort of over-the-top tale of adventure, intrigue, mystery and magic I’m in for. In The Spy Who Haunted Me, the third in the Secret Histories, Green throws Eddie Drood into a series of dangerous encounters. Forced to ally with people who will likely stab him in the back, facing off against demons, ghosts, aliens, psychic nightmares, elves, poor Eddie is pushed to his limits. Due to the nature of the plot, this is a rather episodic book, with our cast catapulted from one location to the next, their numbers steadily dwindling for assorted reasons. Part spy games, part Ten Little Indians, it’s a hell of a romp. Some segments are weaker than others – one involves a lot of sitting around and telling stories – but the stronger portions help to balance it out nicely. I won’t go into details, save to say that once again, Green inspires a “I wish I’d thought of that” reaction in me, more than once.

One aspect of this series that I find particularly interesting is that Green uses it like a needle, to help sew together his other works. By this point, through overlapping locations, characters, or concepts, just about everything he’s done fits together, from the fantasy of the Forest Kingdom, to the space opera of the Deathstalker books, to the urban fantasy of the Nightside and the Secret Histories. Here, we actually get a full-on major crossover with the Nightside in the form of Walker, a constant thorn in Nightside protagonist John Taylor’s side. Events from Shadows Fall are briefly referenced as well, and perpetual cameo Leo Morn of Drinking Midnight Wine fame wanders through at one point. It’s a brave author who finds ways to make it all fit in the same universe, and Green does the best he can. (Though a perceptive reader will still find cracks where things don’t quite mesh up, leading them to wonder just how certain timelines work out between series. Also, a character who died in the previous book is name checked as alive and well here, and I don’t recall any miraculous resurrections…)

As big a fan as I am of Simon Green, I’ll admit that he could be better at times. His overuse of certain stylistic quirks dips dangerously far into the realm of self-indulgence, and he’s been known to lift and reuse entire paragraphs from book to book when the opportunity arises, usually when describing people or places. As a result, his work occasionally feels padded when it could be tightened, and an underlying sense of shortcut repetition creeps in after a while. But even so, no one delivers a story quite like he does. Green’s books always, without exception, leap to the head of my reading list whenever a new one shows up on my doorstep. I thoroughly enjoyed The Spy Who Haunted Me, and I’ll cheerfully recommend it to anyone who wants some wide-screen, no-holds-barred, big ideas and snappy execution thereof, urban fantasy adventure.