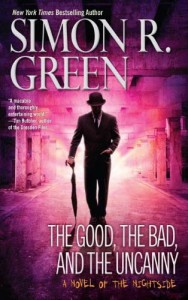 Things never slow down in the Nightside, the secret black heart of London where it’s always the darkest part of the night and the shadows have teeth. And as always, where there’s trouble, there’s John Taylor, private detective and all-around go-to guy when things get weird. His latest job’s unusual, even by his standards: escort the elf known as Lord Screech across the Nightside, and keep him safe against all of the many, many nasty people and things that will undoubtedly come out of the woodwork for a chance at killing an elf.

Providing transportation for this little outing is Ms. Fate, the Nightside’s very own transvestite superheroine. Survive that, and there’s the issue of the three Oblivion brothers, one of whom went missing sometime back, but who desperately needs finding again. Survive that, and John gets to deal with something really upsetting. It seems Walker, Voice of the Authorities that run Nightside, is dying, and he’s looking for a replacement. Who better than John Taylor himself, the one man the entire Nightside knows, fears, and occasionally hates? Problem is, John doesn’t want the job, so Walker’s ready to try the hard sell on him….

The tenth book in the popular Nightside series continues to expand upon a mythos spanning dozens of books and several different series at this point. Not only do we get treated to some more of the Nightside’s strangest, deadliest secrets, including the source of Walker’s terrifying seeming-omniscience, but we meet the third and most dangerous of the Oblivion brothers, who only shows up when reality itself is threatened. We also get some explanation regarding the recent change of leadership involving the Fae, which has also affected Simon R. Green’s Secret History series, and which ties back into an earlier work, Shadows Fall.

Part tour of the Nightside, part farewell to several long-running characters, part Devil’s last temptation for John Taylor, there’s a definite sense of progress and winding down with this book, as though Green’s tidying up the board in preparation for the last few books of the series. It’s chock-full of the usual mad ideas, bizarre concepts, weird moments and characters-writ-large that Green specializes in. Though thoroughly entertaining, it’s more of a payoff for existing fans than a suitable entry point for newcomers. Either you’re in or you’re out at this point.