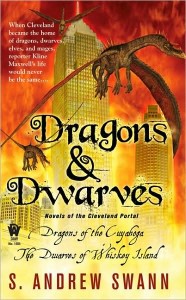 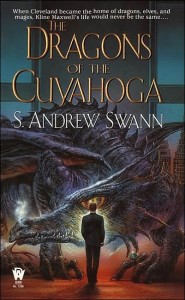 In the ten years since a magical portal opened up in Cleveland, disgorging elves, dragons, mages, and other refugees from a world of fantasy and magic, reporter Kline Maxwell has steadfastedly avoided the “fuzzy gnome” beat, preferring his comfortable and familiar routine covering City Hall. But when fifteen tons of dragon goes into a nosedive, crashlanding with fatal and messy results in the Cuyahoga River, Maxwell is inexplicably assigned to the story. Never one to let a story go unreported, he tackles the subject with grudging interest. For it turns out that this wasn’t just any old dragon, this was Aloeus, first of his kind to cross the Portal and since then irrevocably tied into the doings of man and myth alike.

What could kill a dragon? And more importantly, was someone behind it, and if so, why? Maxwell knows this isn’t an ordinary or easily-explained event. And the further he digs, the more his suspicions are borne out by the reactions he gets. A very ugly and complex picture begins to emerge. Aloeus was indeed murdered, and everyone seems to be involved. The person or persons named Faust. The FBI. The CIA. The Threat Assessment Office. The Cleveland Port Authority. The Mayor. The police, including the predominantly-elven Special Paranormal Unit. The underground mage known as Bone Daddy. Aloeus’ lawyers. Leo Baldassare, go-between and agent for Aloeus and the Portal’s inhabitants. Whoever’s been sending Maxwell cryptic Shakespearian quotes by cell phone. The gargoyle following him. In fact, about the only people not in on this, it seems, are Maxwell and his estranged wife and daughter.

What started as a simple story mushrooms into a conspiracy of terrifying complexity, with Maxwell dragged head-first into the thick of things. Everyone wants to know how much he knows, and they aren’t always gentle about it. Are the cops corrupt, or is the true threat coming from the Mayor’s office? Is the conspiracy one to overthrow the government, or to conquer the world beyond the Portal? Just who or what is Faust, and why does saying that name cause such a bad reaction from all who hear it? Time and again, Maxwell will think he has the answers, only to be set further afield by the introduction of a new element. In a conspiracy where everyone has their own agenda, and a world is at stake, anything is possible.
Maxwell will uncover the truth, but at what cost?

The Dragons of the Cuyahoga is a fastpaced, highly complex story about ambition, greed, magic, and the need to discover the truth of the matter. Maxwell’s an ordinary human caught up in a game of politics and dragons, but ironically, he’s the only one removed enough to puzzle out the many different factors which make this story so unpredictable. The setting is a recognizable Cleveland, with the sort of authentic feel only one familiar with the city can truly convey, but made more fantastical and more dangerous by the addition of immortal, inhuman beings. In this regards, it bears some resemblance to Laurell K. Hamilton or Jim Butcher’s works, but don’t be fooled. Swann has created a setting uniquely his. You can add Cleveland to the list of cities infested by magic, for better or for worse, just like Chicago, Minneapolis, Pittsburgh, and Newford.

This was a fun read, and not being able to guess the “whodunit” until very late in the story made it all the more enjoyable for me. If you like your fantasy or urban fantasy with that extra edge, and a heavy dose of complex murder mystery, this is one to look for. As well, Swann is an author I’ll keep my eye on, in the hopes he’ll return to this setting.