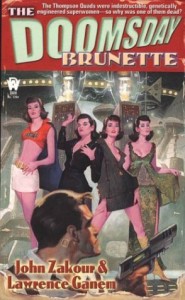 Zachary Nixon Johnson, the last freelance private investigator on Earth, is called upon to unravel yet another bizarre case in The Doomsday Brunette, his second outing. This time, he and his AI partner are summoned to the estate of Ona Thompson, one of the world’s four most perfect woman, in order to investigate the murder of her sister, Foraa. It seems that the Thompson Quads, four genetically-enhanced clones, have finally had the falling out people have been predicting for years. So who killed Foraa? Was it Twoa (the would-be superhero)? Was it Threa (the fairy princess)? Was it W, the ancient butler? Sturm and Drang, the identical cousin security consultants? Opie, the intelligent gorilla? Or was it indeed Ona, who inherited everything from her father/creator, leaving nothing for her sisters? Once Zachary starts digging, it becomes clear that everyone had a reason for wanting Foraa dead… including the murder victim herself.

Naturally, this means everyone wants Zachary dead, also. Luckily, he’s a hard man to kill. He’s had plenty of practice at surviving ridiculous odds. He’ll risk his life, his reputation, and his career to see justice done properly and earn that fat paycheck at the end of the case. Now if only he wasn’t caught between disgruntled aliens, and a doomsday device….

The Doomsday Brunette, like its predecessor, The Plutonium Blonde, is a wild and crazy adventure that blends noir detective fiction and far-out future SF to create a tongue-in-cheek, thoroughly enjoyable story. It doesn’t take itself too seriously, which is one of its best features, allowing it to stand out from all the other humorous science fiction murder mysteries out there. I know it’s a relatively small field, and all the better. Give this one a shot if you want some amusement.