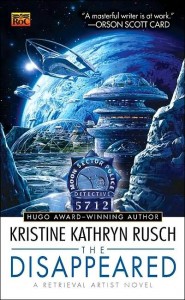 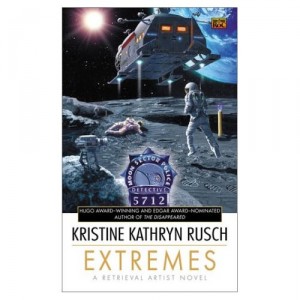 In the future, we’ve finally made contact with alien races. The only problem is, they come complete with laws and mores that occasionally seem incomprehensible to us, and part of the diplomatic concessions made to these aliens grants them the right to exact punishment from those who break their laws. Even humans aren’t exempt, and death is an all too common option. In the future, the only way to escape this fiendish justice is to vanish, to become one of the Disappeared. Companies exist to fulfill this need, and their records could save or damn thousands of people currently hiding from sentences ranging from enslavement to death. It looks, though, like someone’s cracked those records. All of a sudden, the Disappeared are no longer safe, and only one man has the tenacity to get to the bottom of this mystery, in The Disappeared.
Miles Flint, a space cop stationed in Armstrong, the Moon’s oldest and largest city, has just been handed a particularly nasty set of murders, which look just like alien vengeance killings. Add in several kidnapped human children, and he’s got a real mess on his hands. Lives are at stake, more than he can imagine. But is he willing to pay a heavy price to stop the betrayal and killing of thousands of people he’s never met?
In Extremes, Miles Flint has set himself up as a Retrieval Artist, one of the specialized investigators trained in the art of finding people who can’t or don’t want to be found. He’s inherited the caseload of his mentor, the now-retired Paloma, and he’s about to find out that old secrets die hard. Even as a major company seeks to hire him, a bizarre murder during the infamous Extreme Marathon on the Moon leads to the resurrection of an deadly plague. Is Flint’s new case connected to the resurgence of the feared Tey virus? If Flint screws up, or if fellow Retrieval Artist Miriam Oliviari fails in her own mission, Armstrong will become a tomb on the Moon.
Both The Disappeared and Extremes are excellent examples of science fictional police procedurals, mixed with adventure and complex plotting. Flint is a quintessential hardboiled character, too stubborn to quit no matter what the cost or how lonely a life he leads as a result, while his former partner Nicole DeRicci is an extremely strong female character, more than capable of holding her own under the most stressful of situations.
If there’s one quibble I have with Rusch’s Retrival Artist series, it’s that we’ve spent two books so far and haven’t really tapped into the central conceit of the “Retrieval Artist”. The first starred Flint as a cop, paving the way for him to become an Artist, while the second was more of a suspense/adventure set on the Moon. We haven’t seen him really try to “retrieve” anyone beyond Armstrong’s dome, yet. There’s a lot of potential, and I just hope we get to see more of it in the next book. On the whole, though, Rusch is off to a great start.