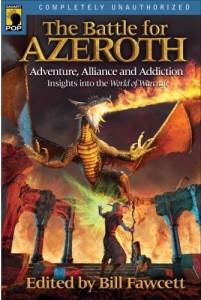 My name is Michael, and I am a World of Warcraft addict. I started playing the game in early 2005, a few months after it was officially released to the public. My main characters include a level 70 restoration-specced night elf druid, and a level 70 holy/retribution-specced human paladin. I’ve played every class and every race, at least for a little while, and my (real life) wife plays the cutest, sweetest, most destructive gnome mage I’ve ever met.

And if you have no idea what I just said, then you haven’t been around World of Warcraft (to henceforth be known as WoW) much, if at all. Which means you may not fully appreciate this book. The Battle For Azeroth: Adventure, Alliance, and Addiction, is part of BenBella’s ongoing SmartPop line, and is a collection of essays looking at different facets and elements of one of the world’s largest, most popular online role-playing games. Being the Warcraft fan that I am, I thought this would be a fascinating, and entertaining book to read. That it has taken me so long to collect my thoughts on the matter can only be blamed on WoW itself. So let’s see what it has to offer, shall we?

Scott Cuthbertson’s introductory essay, “Elegant Game Design: Fishing For Those Missing Hours” is brief, and not entirely focused. He doesn’t seem to entirely know what he’s really trying to say, except to praise the creators of WoW, Blizzard Entertainment, for taking as long as is needed to put out quality games, rather than rush perfection. It’s not the strongest offering in the book, and a weak start.

James Bell’s “Underworld of Warcraft” is an engaging look at what goes on beneath the surface of game play, including sex, politics, religion, and every WoW player’s bane: the so-called Chinese gold farmers. Not always Chinese, the gold farmers are those people who play day and night (or who use automated bots and scripts) to make in-game money (gold) which can then be sold to other players for real life money (something strictly forbidden by Blizzard’s terms of play.) From Christian-themed guilds to fan made films to people making actual money from playing the game, there’s a lot more going on than many casual players would ever realize.

Justina Robson’s “Warcraft: Timesink of the Gods” is a long and somewhat rambling essay that looks at the many little things that make up the whole of WoW, from in-game professions such as fishing and cooking, to in-game jokes (WoW slips in hundreds of pop-culture references) to immediate gratification (ask any player how quick those first few levels accumulate) to Warcraft as a form of personal therapy. It’s a good essay, interesting and conversational, but at the same time, a little dry, trying to make a few too many points.

Nancy Berman’s “LFG… And a Little More” is actually rather intriguing, dealing as it does with the nature of people to interact, flirt, and even develop romantic attachments in game. (I’ve never developed a relationship in WoW… my wife, the gnome mage of doom, would send a fireball up my rear if she caught me making time with some night elf hussy…) The downside of her essay is that it doesn’t focus just on WoW, it draws in information and experiences from a number of MMORPGs (massively multiplayer online role-playing games, such as Everquest, Ultima Online, or World of Warcraft). I think it loses something with its lack of focus solely upon the experience as found in Warcraft, given the supposed nature of this book. Nonetheless, it’s a fascinating topic, as it’s all too natural, or tempting, for people to fall for the pixels on their screen.

In “Reframed Relationships: MMORPGs and Societies,” Mel White offers up a scholarly look, from an anthropologist’s viewpoint, at how games like Warcraft have created a whole new level of community and society, and how we naturally break down into social groups within that community. From the gathering of friends and like-minded individuals into guilds, to the player-harassing ‘griefers’ to the casually cross-gendered characters (it’s so easy for men to play female characters, and women to play male, after all), to those who can act differently than they would in real life, they all come together to create what White calls a cyber-reality. Clearly, this is just the tip of the iceberg, and someone could take the study a whole lot further (and likely already has).

Jerry Jackson’s “The Economy of World of Warcraft” is another essay where the topic is more interesting than the title would suggest. The in-game economy is a major part of Warcraft’s appeal for some people, and whether it’s making gold to buy that special piece of equipment you’ve always wanted, or playing the Auction House (you can sell almost anything you find, to someone, for one reason or another) or just comparing the relative values of objects (so-called epics, no matter how bad they might be in comparison to more common items, draw a hefty price just for their rarity), there’s always a deal to be made. Some people come to Warcraft just for that purpose, finding as much challenge in cornering the market on a profession as others do in slaying a dragon.

“Ancestors and Competitors,” by Chris McCubbin, is a delightfully in-depth article which looks at the evolution of gaming, starting with the tabletop ancestor, Dungeons and Dragons, before moving online with the first text-based MUDs, and then into the graphical-based games such as Warhammer, Everquest, and Ultima Online, showing us just what steps were taken before a game such as World of Warcraft could exist. Frankly, this essay, with its attention to details and its back to basics attitude, should have been the lead for all of the rest, as it really does a good job of laying the framework for everything else.

I must confess, I don’t know why James M. Ward’s “Maps and Mapping” is in this collection. While it’s a nice, short essay about maps in RPGs, it has little relevance to World of Warcraft, where the map automatically fills itself in for you as you discover new areas. He barely even mentions WoW after the first paragraph, making this an odd inclusion for the book’s focus.

Then you have Maressa Hecht Orzack and Deborah S. Orzack, whose “Should We Sell World of Warcraft by Prescription Only?” which looks at the extreme darker side of a game like this. They call attention to the true addicts, the people who sacrifice their real lives for pixilated success, throwing away school, friends, careers, and money, and even their own lives. It’s part cautionary tale, part call to arms, and part alarmist, as they sample a few worst-case scenarios. Admittedly, the people who kill themselves over a game, or who flunk out of school because of their obsession, are in the tiny minority, but they are a very real threat. It’s an interesting, well-written essay that seems to revel in addressing these nightmare cases.

“Altaholics Not So Anonymous,” by Doranna Durgin and Nancy Durgin, is an amusing, giggle-worthy look at the tendency of many players to have multiple characters for a variety of reasons. Reading this article, I can see the truth in it, as I’ve made a few alts in my time, for many of the stated reasons. Boredom, variety, the desire to try new classes or races, the desire to cover multiple professions, and the need for a banker character to help store and process all the stuff the others pick up, it all factors in. Their use of humor in the essay was a nice touch, and a change of pace from the dry, scholarly tone of some of the other offerings.

Nancy Berman’s “I Play Like A Girl” is an intriguing, sweeping look at the role of women in MMORPGs, studying why they play, what they play, and how they play. It’s definitely an interesting topic, and Berman tackles it well.

Jody Lynn Nye closes out the essay section with “Advice to the WoWLorn.” In it, she gives advice for those people who’ve lost their partners to the lure of the game, giving them helpful tips and tactics for regaining their attention and bringing them back to the real world. Her advice is both humorous and practical, and this essay is the one that should be photocopied and sent to anyone who knows a Warcraft player. Just in case.

The rest of the book is taken up by Chris McCubbin’s series of articles looking at each of Warcraft’s nine character classes. Each one talks about the role of the class in the game, before delving into historical, mythical, or literary antecedents and inspirations for the class, and finally wrapping up with a suggestion of how to play the class in Warcraft. These are well-written, thoroughly-researched, presented in an accessible style, and well worth reading. If anything, they may the best part of the book, offering as they do some insight into why these particular classes work so well as character archetypes, and why they fit together.

Overall, I really enjoyed The Battle For Azeroth. It has some weak moments, and a couple of the essays didn’t feel suited for the topic, being only loosely connected, if at all, to World of Warcraft themes, and some are less insightful than others, but as a whole, it’s a useful and entertaining volume that Warcraft fans might just enjoy. Of course, in some regards it’s already out of date, since Warcraft has since seen its first major expansion, with the addition of two new races, a new profession, and more areas to explore, as well as various in-game tweaks and patches, but it’s still fairly relevant. I’d recommend it to my fellow players, if just for the curiosity factor and entertainment value.

Now, if you’ll excuse me, I have an alt to level…