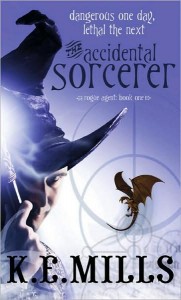 For probationary Compliance Officer Gerald Dunwoody of the Ottosland Department of Thaumaturgy, it was supposed to be a routine safety inspection. You know, nose around a little, find out why the Stuttley’s Superior Staff factory hadn’t been submitting their paperwork properly, finish the report and go home. Nothing was supposed to go wrong.

One major accident and a blown-up factory later, Gerald Dunwoody’s out on his rear and out of a job. Desperate for work – not much call for a Third Grade wizard who can’t hold a job and who gets involved in scandals of this magnitude – he decides to get out of the country for a while. It seems the distant kingdom of New Ottosland is in need of a court wizard and they’re not terribly picky in the matter. So off Gerald goes, to a kingdom left behind by time and Tradition, situated in the middle of nowhere and nearly broke courtesy of economic sanctions brought on by their desert neighbors. At first, it seems like the perfect place to lay low and wait until things blow over at home, with the added bonus of making his resume look good.

Unfortunately, New Ottosland is anything but perfect. Princess Melissande is a frumpy, perpetually-stressed woman pressed into service as the Prime Minister. Prince Rupert is a blithering idiot who prefers butterflies to people. And King Lional the Forty-Third is ambitious, cunning, ruthless, and dangerous. Before he realizes just how deep he’s gotten himself, Gerald’s thoroughly entangled in Lional’s plans for a greater, grander New Ottosland, and getting out may just kill him. To complicate matters beyond any hope of redemption, it seems that Gerald’s accident at Stuttley’s has left him in possession of more power than he dreamed possible. Together with Melissande, his best friend (and magical genius) Monk Markham, and a rather obnoxious talking bird named Reg, Gerald Dunwoody will save New Ottosland … but at what price? And can one ever go back to a normal life after this sort of thing?

The Accidental Sorcerer is the first book in K.E. Mills’ (better known as Karen Miller) new trilogy, Rogue Agent, and it’s quite a change from her usual fantasy epics. It’s a pseudo-modern semi-comic fantasy set in a world greatly reminiscent of our own, circa the post-Industrial Revolution, British Colonial era. Mills takes enough liberties with the setting to make it hard to narrow it down precisely, but that’s the vibe I got from the book, with much of the action taking place in New Ottosland, a former colony situated in an oasis located in the middle of a desert. There’s evidence of some modern technology, such as cars and electricity, but magic is widespread and built into the very fabric of this world’s infrastructure. The end result is an immensely fascinating, notably different setting that’s full of story potential, and I definitely want to see it explored in more depth. There’s just not enough of this sort of thing, semi-historical industrialized fantasy, and Mills pulls it off quite nicely.

As mentioned above, this book is laced with humor, a dry sort of wit that sneaks around and insinuates itself when least expected. Occasionally, it shows up in the sheer absurdity of some situations, but mostly it manifests in the lightning-quick repartee of the main characters as they react to their surroundings and one another with a growing urgency and shrillness, while things collapse around them. Gerald and Reg have a great dynamic – he’s a bumbling sorcerer in over his head, she’s a several hundred year old talking bird with an opinion for every occasion – and together, they make a heck of a team. Someone better versed in British humor and sitcoms – the author’s a Canadian-born Australian – would likely be familiar with this sort of thing, but I’m finding it all quite new and extremely entertaining. Toss in the practical Princess Melissande and the perpetually-distracted Prince Rupert, and finish it all off with King Lional, a terrifyingly nasty piece of work, and you have a memorable cast of characters.

The plot itself moves along rather quickly – I found myself devouring this 500+ page book in two days – but it’s highly enjoyable. It catches you with an explosive beginning, and then moves on inexorably as Gerald gets wrapped up in things beyond his control and a few attendant mysteries, and then takes a real turn for the serious about two thirds of the way in. And by serious, I mean that things get ugly with regards to evil plots, and the abuse of Our Hero. And once things hit that point, there’s no stopping.

I was a little hit-and-miss when it came to Karen Miller’s other books – The Kingbreaker, Kingmaker duology was good but not great – but with this series, I’m absolutely hooked, and will be looking for the rest of the series as it comes out. For something that’s not just your average, ordinary, everyday epic American fantasy, you could do worse than to check out The Accidental Sorcerer.