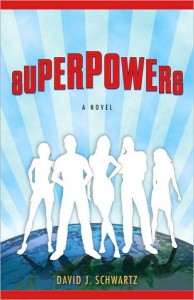 Who remembers the Madison All-Stars? For a short time in 2001, Madison, Wisconsin, was the home to a group of five super-powered college students, banded together in a shared attempt to understand their powers and change the world for the better. Painstakingly reconstructed through research and interviews, firsthand accounts and eyewitnesses, this is their story. A story of triumph and tragedy, heroism and loss, of the human spirit.

It all begins when five students wake up after a party, each with a hangover, and a different superhuman ability. Jack Robinson has become the fastest man around. Caroline Bloom can fly. Harriet Bishop can turn invisible. Mary Beth Lawson is inhumanly strong and durable. And Charlie Frost can read minds, whether he wants to or not. Naturally, there’s a lot of adjusting to do, for all of them, as they struggle to reconcile their unique abilities with their normal lives and scholastic careers and part-time jobs. Before long, the group decide to take things to the logical level, becoming actual superheroes in an attempt to use their powers for good. Solving crimes, foiling bank robberies and convenience store heists, preventing suicides and accidents, and so on, the so-called Madison All-Stars do their best to keep their identities secret as they fight crime, one day at a time.

But there’s all kinds of pressure mounting upon our heroes. School. Family. The authorities. The public. External demands and internal conflicts of personality, and the sneaking suspicion that there’s more, much more to their powers that meets the eye. With everyone from the police to the press sniffing around, the group begins to fragment under the strain, and in the wake of the events of September 11, 2001, even as the deadly truth about one person’s powers emerge, it seems as though the world may indeed have seen the last of the Madison All-Stars. Were they heroes? Or just idiots in silly costumes? This is their story.

Superpowers is an odd book, to say the least. It reads like a love letter to comic books, written by someone deeply familiar with the genre conventions, but with an eye towards grounding things in the real world. The five superpowered characters – Jack, Charlie, Harriet, Mary Beth and Caroline – are ordinary college students, with wants and needs and desires, and feet of clay. They’re incredibly mundane, but their reactions to their powers are all too believable. Who wouldn’t revel in flight, or be overwhelmed with uncontrollable receptive telepathy, or prone to showing off a little now and again? They fight crime in costumes because, well, it’s sort of expected, and they don’t have any better ideas that wouldn’t expose them to worse potential dangers, like being kidnapped and dissected by the government. It’s an odd, if logical, way to go about doing things, and Schwartz doesn’t pull any punches in looking at how they affect the world, and how the world is affected by them. He looks at how fragile secret identities are, how the best of intentions can turn out poorly, and how a moment of weakness or bad judgment can have immense repercussions. In short, it’s certainly a realistic treatment, without delving too much into the grim and gritty exemplified in a work like Watchmen.

When you get right down to it, Superpowers is, at its heart, fairly mundane. There’s no world-saving, or epic villains to fight, or great castastrophes to stop. There’s just a handful of confused, conflicted young men and women in a relatively small city, and the people changed and touched by their brief time as superheroes. They drink, swear, have sex, screw up in a variety of ways, hurt one another and themselves, and do the best they can to function in a world not ready for people like them. Schwartz does venture into intriguing territory later on in the book, when he brings up the idea of previous superpowered groups, operating either in public or private, and the thought of someone rewriting history to cover it up. It’s those brief glimpses at a larger mythology that make me want to see more of this world, the thought that the Madison All-Stars weren’t alone, that this wasn’t a one-time happening, and that someone out there has the influence and power to simply make them vanish from the history books and news archives.

All in all, I really did enjoy this book. Once I started reading, I couldn’t put it down. I had to know just what became of our little band of would-be heroes, and I was disappointed when their story ended, even knowing going into it that theirs was a finite tale. It might not have been everything I wanted in a superhero book, but Superpowers is nonetheless thought-provoking and entertaining, and Schwartz really captures the various voices of his protagonists. I’ll be looking for him in the future.