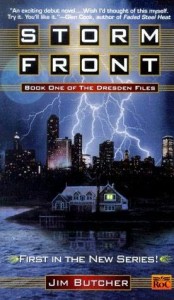 In a world where magic is all too real, where the Unseelie Incursion of 1994 caused the entire city of Milwaukee to vanish for several hours, where a nasty drug called ThreeEye can actually awaken the user’s ability to see the spirit world, and where vampires and faeries do exist, Harry Blackstone Copperfield Dresden is the best — and only — at what he does. He’s not just a wizard, capable of altering the world with spells and conjurations, he’s a public wizard, one who uses his abilities to help people. He’s a private detective with magic, and one kept on retainer with the Chicago Police, for those cases that normal people just can’t solve.

That’s his ad in the Yellow Pages, the only one you’ll find under “Wizards.” He’s a classic PI, with every one of the signs of a traditional pulp detective. He’s a hard-drinking, hard-luck guy with a heart of gold, horrible luck with women, too many bills to pay, enemies breathing down his neck, and a talking skull in the basement.

Hey, we all need friends. Or at least familiars. And since, as a wizard, sensitive to the supernatural forces of the universe, Harry tends to break and short out anything more modern than a bicycle, and computers are right out, he needs something capable of remembering how to create those escape spells and love potions.

This particular case, billed as “Book One of the Dresden Files,” starts off when a damsel in distress asks Harry to find her missing husband. Then the Chicago PD calls, needing him to investigate a murder that no earthly force could have accomplished. And before Harry knows it, he’s up to his staff in trouble.

There’s a magical killer on the loose, a mob boss who wants him off the case yesterday, bills to be paid, a reporter willing to … er … pump him for information, police demanding results, and oh yes, if Harry breaks any of the Seven Laws of Magic while pursuing this investigation, he’s marked for death.

This is where the carefully laid backstory begins to emerge in bits and pieces.

For unspecified reasons, Harry’s been slapped with the Doom of Damocles, a pretentiously-named punishment decreed by the White Council, those human wizards who regulate their own kind. Harry’s got Morgan, the wizardly equivalent of a hard-nosed parole officer, on his tail. One false step, and it’s death by Monday.

Assuming that the killer on the loose doesn’t cause Harry’s heart to explode right out of his chest, first.

Or the mob doesn’t beat him to a pulp with a baseball bat.

Or the demon doesn’t get him.

Or the vampire madam doesn’t suck him dry.

Now, any -sane- man would take the money and move to Florida. Right? Not Harry Blackstone Copperfield Dresden. He’s possessed of all the common sense and survival instincts of any hard-boiled detective. He’ll solve the case even if it kills him. Both the murder case, and the missing husband case.

Yes, it’s one of -those- weekends for our hero. With a death sentence on his head, his resources — both magical and mundane — draining slowly, and a trail of corpses wherever he turns, he’s still going to be the hero.

This is one of the best books I’ve read lately. It’s not a classic, it’s not high literature, but it’s just plain -fun-. Combining the best aspects of hard-boiled detectives, in the tradition of Dashiell Hammett and Raymond Chandler, with the best aspects of urban fantasy, it’s good gritty page-turning fun. I couldn’t sleep until I’d finished the book.

The characters are dead-on. Harry’s an archetype, yes, but a fully-realised one, whose dark past has only begun to come to light in this, the first book in what’s presumably a series. Director of Special Investigations Karrin Murphy, Harry’s contact with the Chicago PD, is a strong woman, fully fleshed out. She has a soft spot for Harry, but at the same time is fully prepared to do whatever the case takes, unwilling to let that soft spot interfere with her duty. If he becomes a suspect, so be it. Morgan, Harry’s ‘parole officer,’ comes off as the typical bad cop, but even he has his redeeming moments. Even the villain of the piece comes away with reasons for what he does, as opposed to being evil for the sake of it.

The plot is tight, and full of twists and turns, the various threads tying together slowly, and the picture being revealed. By the end, of course, all is made clear, but will it be in time?

Well, since this is Book One, and not “The only book ever,” about Harry Dresden, you can draw your own conclusions.

I haven’t been this excited about a first novel in a while. It’s reminiscent of Laurell K. Hamilton’s Anita Blake series, with that same dark atmosphere, but it’s also got a little of Emma Bull in it, with the ray of hope shining through. Harry’s a good man in a dark world, and he’s aiming to keep it that way. I’m looking forward to more about this character, and by this author. Give it a shot.

“The world is getting weirder. Darker every single day. Things are spinning around faster and faster, and threatening to go completely awry. Falcons and falconers. The center cannot hold.

But in my corner of the country, I’m trying to nail things down. I don’t want to live in his jungle, even if it did eventually devour him. I don’t want to live in a world where the strong rule and the weak cower. I’d rather make a place where things are a little quieter. Where trolls stay the hell under their bridges, and where elves don’t come swooping out to snatch children from their cradles. Where vampires respect the limits, and where the faeries mind their p’s and q’s.

My name is Harry Blackstone Copperfield Dresden. Conjure by it at your own risk. When things get strange, when what goes bump in the night flicks on the lights, when no one else can help you, give me a call. I’m in the book.”