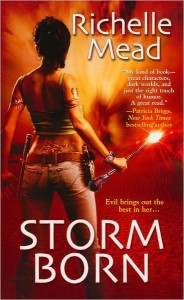 Meet Eugenie Markham. Under her professional name of Odile Dark Swan, she’s a powerful shaman who hunts down unruly and unwelcome spirits, either killing or banishing them back to the Otherworld, depending on the circumstances. Mercenary and relentless, she’s become something of a name to be feared among the supernatural circles. With a variety of spells and weapons to suit any occasion, and a trio of spirits bound to serve her, there’s very little that can give her pause for long. Until now. When she takes on a job to rescue a fifteen-year-old girl who’s been kidnapped by the fae (or gentry, as she refers to them) and taken to the Otherworld, Eugenie quickly discovers there’s far more to this case than she originally thought. For one, her real name’s gotten out among the elementals, spirits, and gentry of the Otherworld, linked to a prophecy that says her firstborn will finish the work started by a long-banished warlord, conquering the mortal world in the name of the gentry. Now, every supernatural nasty around either wants to kill her, or father her child, and Eugenie wants nothing to do with it.

To complicate matters, two very different men have come into her life. The first, sexy shapeshifter Kiyo, inspires an instant attraction in her, and their initial meeting is as passionate as it is whirlwind. Unfortunately, he may be working for someone else, seducing Eugenie for an ulterior purpose. The second, gentry king Dorian, is mercurial and dangerous, with a taste for bondage and a knack for getting past her defenses. Unfortunately, he’s everything she hates and fears, one of the creatures she’s dedicated her life to fighting and killing. If she’s to ally herself with either of these men, she’ll have to overcome a lifetime of prejudice and bias, and learn to accept her hidden heritage and swiftly-increasing powers. Ignoring them isn’t an option, as she’s sworn to rescue Jasmine from her ruthless captors, even if she has to defeat one of the most powerful gentry alive in the process. No, for this job, it’ll take everything Eugenie has and then some. Regardless, if she survives, she’ll be transformed, forever by the experience.

Storm Born is the start of a new series from Richelle Mead, best known for her series featuring reluctant succubus Georgina Kincaid. In this series, Mead introduces us to a whole new world, and a heroine of a very different sort. Eugenie is highly competent, professional, determined, stubborn, and passionate, a feisty woman with a mean left hook and a quick trigger finger, and she’s rightly dubious about the circumstances in which she finds herself. She walks that thin line between adaptable and gullible, and it’s nice to see that while she’s open to changing her mind, she doesn’t commit to change without a good reason. I really like her, and I think she has the potential to go far.

I will say that in some ways, the plot reminds me of Laurell K. Hamilton’s Merry Gentry series. Both feature an tough, female protagonist of unusual lineage who get dragged into Fae/Otherworldly politics pretty much against her will. Moreover, both feature plots involving the main character being sought out for sex by all manner of suitors, again for political/prophetic reasons. But upon further examination, any resemblances are superficial; Merry Gentry may seek out bedmates with great abandon, but Eugenie Markham is pretty picky about who she gets close to, and makes her feelings quite clear on the matter. Furthermore, Richelle Mead throws in a few surprises along the way, that’ll either have the readers nodding with satisfaction, or blinking as they look back for clues. Frankly, let’s go ahead and throw out those Merry Gentry comparisons altogether, now that we’ve addressed the concern. Storm Born is definitely something new and different. Mead populates it with an eclectic and occasionally obscure variety of mythical creatures, from elementals to keres, hags to kitsune, in such a manner that it seems natural for them all to exist in the same setting, and ties them all together with the powerful, capricious, enigmatic gentry.

Faced with the choice of grabbing some much-needed sleep on a recent road trip, or reading this book in one long sitting, I choose the latter and have absolutely no regrets. Sleep deprivation, sure, but no regrets. Storm Born features a fascinating setting with an exciting plot and an enjoyable new heroine, makes good use of mythology and folklore, and spices it up with several downright sizzling erotic encounters with some memorable romantic leads. Both Kiyo and Dorian bring a lot to the story in terms of personality and appeal, and it’s easy to see why Eugenie is tempted by them both, for all the issues standing between her and either of them. Her love/hate mentor/student enemy/ally dynamic with Dorian is a whole lot of fun to watch, especially.

I’m genuinely excited by this series and looking forward to seeing where it goes from here, as Mead leaves us with an interesting new status quo by the end of the book. This sort of urban fantasy is definitely bound to appeal to fans of Jim Butcher, Kim Harrison, Kelley Armstrong, or yes, even Laurell K. Hamilton. Give it a shot.