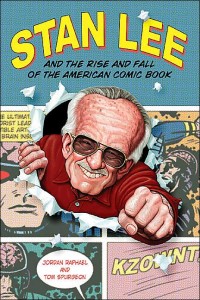 He’s a shameless huckster, an unrepentant storyteller, a charming old man, a never-say-die opportunist whose career has spanned decades, following the ebb and flow of the comic book industry in America. He’s a modern-day P.T. Barnum, part writer and part con man, but so loveable in his over-the-top mannerisms it’s hard to stay mad at him for long. He’s Stan Lee, and this is his story.

However, to tell the story of Stan Lee is to chronicle the history of comic books in America, starting in 1940 and continuing right up to the modern day. To tell his story, one has to also look at the other legends in the field: Jack Kirby, John Romita, Steve Ditko, and so many more. To speak of Stan Lee is to talk about Marvel Comics, and its earlier incarnations. For all of those stories are intertwined.

Who doesn’t know Stan Lee? His name was on every comic book to come out of Marvel for decades, as writer, as editor, as publisher, or as their ambassador to the world. “Stan Lee Presents….” was the tagline for Marvel back in the day, until very recently indeed. He’s been the guy to interview for just as long, the so-called creator of the Marvel universe, the creative genius who gave birth to Spider-Man, the Hulk, the Fantastic Four, Daredevil, and the X-Men. His catchphrases are legendary: “‘Nuff said!” “Face front, true believer!” and “Excelsior!”

But who is Stan Lee? Even he admits that the stories of his youth are a tad exaggerated, a touch fabricated at times. Never one to let reality get in the way of a good story, he’s rewritten his own history to play up his destiny as a writer. Certainly, reality is a little slippery where he’s concerned. What part did he really play in the history of comic books? How much of the Marvel Universe was his creation, and how much can be attributed to the other talents involved?

Those are all questions Jordan Raphael and Tom Spurgeon set out to answer in their definitive biography of Stan the Man. Drawing from articles, interviews, and other sources, they’ve laid out the life and times of Stan Lee (born Stanley Lieber), weaving the threads of his story in with the evolution of the comic book field, from its glory days during World War Two, to the social repression of the Fifties, all the way through the dark days of the Eighties and Nineties, to today. This book is just as much about the comic field in general, and Marvel Comics in particular, as it is about Stan Lee. Fact-heavy and well-written, its engaging writing style keeps things moving right along, never bogging down in the details. Clearly, the authors know their material; it takes a certain amount of familiarity with the industry to properly convey the impact of a man who was there almost from the start.

Let’s lay it on the line. Stan Lee’s been in the business a long time. He combines the best and worst aspects of a sideshow barker, a used-car salesman, a Hollywood producer, and a writer. He’s spent so long hyping himself that he’s actually begun to believe it. Though he was instrumental in creating some of the best-known comic characters of the past forty years, he’s been milking the same cow for decades; all of his more recent attempts to capture lightning in a bottle have met with failure. Even his recent work for DC Comics, reinventing their characters, felt old, as though he was rehashing the past. At the same time he fronts for Marvel, acting as a spokesperson, he’s suing them for more money based on the results of certain blockbuster movies. He’s the trickster god of the comic geek pantheon, adept at playing himself on the silver screen (such as in Kevin Smith’s Mallrats) and always looking for the next big thing. Cursed with a short attention span, he can spew out comic plots, but can’t write a book. He’s been a hero in the comic industry, and he’s been a villain. He’s done some things he’s not proud of, and burned a few bridges along the way, alienating creative partners and industry professionals, and yet somehow, it’s never his fault. Much. He’s just Stan Lee.

And that’s what Stan Lee and the Rise and Fall of the American Comic Book is all about. The authors don’t shy away from pointing out the inconsistencies, the feet of clay, the mistakes he’s made. Even though they treat him with respect, they’re not afraid to point out Lee’s bad moments. Did he create the Marvel Universe, or just steal all the credit? Is he a genius, or just a guy in the right place at the right time with a knack for tapping into the right thing?

I’m a comic geek at heart. My collection takes up a significant part of the basement. I thought I knew a lot about the history of the field, and about Stan Lee. After reading this book, I know a lot more. Spurgeon and Raphael have done an excellent job of drawing from numerous sources to present a cohesive, coherent narrative covering the career of Stan Lee, and the ebb and flow of the industry he’s been an integral part of. For those who like comics, this is a great history book. For those who don’t know a thing about the field, this is a great introduction. Frankly, I was impressed with just how accessible it was overall. I recommend this book, and it’ll find a valued spot on my shelf with other comic reference books.