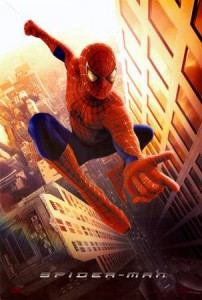 With great power comes great responsibility. It’s the guiding mantra behind one of the 20th Century’s greatest heroes. But before he was a hero, he was a young man. A confused teenager like every other, with a crush on the most beautiful girl in school, a loving family, and a reputation as a loser, geek, nerd… you name it.

Spider-Man reinvents the classic comic book character for the big screen, remaining as faithful as possible to the source material. We follow the evolution and growth of Peter Parker from tormented geek to daring hero. All the classic elements are in here. He’s bitten by a genetically-manipulated spider (it was radioactive in the comics), and his body chemistry is radically rewoven, granting him (proportionately) the powers of a spider: super-strength, flexibility and acrobatics, a near-psychic ‘spider-sense’ to warn him of danger, the ability to spin webs from his wrists. He’s still being raised by his loving Aunt May and Uncle Ben, with whom he’s lived ever since his parents died in a plane crash early in his life. There’s the prettiest girl in school, Mary Jane Watson, who dreams of becoming an actress. There’s the class bully, Flash Thompson, football hero. There’s even Harry Osborn, rich kid with overbearing businessman father Norman.It’s all there: The spider. The public appearance of Spider-Man as celebrity. The burglar. The death of someone important to Peter. The vengeance he seeks that changes into a need for justice. The red and blue costume. And the maniacal, deadly Green Goblin, who circles Peter and Spider-Man, capturing them both in a web of his own design, threatening to kill our hero if he doesn’t join the Goblin.

Long-time readers of the comics will be familiar with the Goblin’s origin. For those not in the know about who lives, who dies, who the Goblin is, and who lives happily ever after, I won’t spill the beans. I will say this: Spider-Man hits the mark. It is easily one of the best comic book derived movies ever, taking the source material faithfully, adapting it only where one needs to compress and distill forty years of back story down into one story. This is actually a mixture of two classic Spidey story lines, his origin, and the Death of Gwen Stacy. For those of you scratching your head and wondering who Gwen Stacy is or was, don’t worry… She’s dead.

This is one of those movies that couldn’t have been done properly without the advances made in CGI and special effects. Thanks to technology, Spider-Man finally moves like he should: fast, agile, triple-jointed, almost alien in his patterns and flexibility. The Goblin, in his technologically-enhanced suited and ominous glider, is equally impressive. We can follow their aerial battles, or even just the sheer adrenalin rush of swinging at breakneck speed through the city canyons on a thin strand of webbing, and feel like part of the action.

Yes, where Spider-Man hits the mark is with faithfulness, story, and image. It bogs down here and there with improbable coincidences (how can one person have so much bad luck in his life?) but such things have always been part of the story. Sure, questions arise, like what about the -other- genetically-enhanced spiders, the ones that didn’t bite anyone? But hey, no film is perfect.

Willem Dafoe is perfect as Norman Osborn, conveying a bizarre sense of duality and growing, desperate madness as the story progresses, eerily reminiscent of Jack Nicholson’s performance as the Joker in Batman. He really does manage to portray fatherly love and cold detachment with equal aplomb, and when he goes all out as his alter ego, he goes all out.

Tobey Macguire does a credible, even enjoyable job as Peter Parker/Spider-Man. He definitely pulls off the geek-turned-hero vibe quite nicely, capturing that spirit of adventurous joy that comes with someone given a release for their emotions for the first time in their life. He may need to grow into the part, but he has the basic spirit down.

Kirsten Dunst does nicely as Mary Jane Watson, although she never quite throws herself into the role with the zeal needed to carry off the devil-may-dance attitude of the comic book variation, but she doesn’t disgrace the role either. Given more time, she’ll undoubtedly sizzle in the role. Unfortunately, the chemistry between Peter Parker and Mary Jane never quite works for me. There’s something a little wooden, as though they don’t connect on the level they should, quite yet. That’s okay. In the comics, it took months before the two even met, and years before that spark truly came to life. The interaction between Peter Parker and Norman Osborn, and Spider-Man and the Green Goblin, is much more intense.

J.K. Simmons, as J. Jonah Jameson, irate newspaper publisher and Peter’s sometimes boss, is dead-on perfect for the role in terms of looks and attitude. This is the Jolly Jonah we’re used to, the one dismissing the pictures as crap, but buying them anyway and taking Peter on as a freelance photographer. Thus setting up the irony: Peter takes pictures of Spider-Man and sells them, while J.J.J. uses the pictures to terrorize and blast Spider-Man in the Daily Bugle. Some days you can’t win.

Cliff Robertson, as the fatherly Uncle Ben, and Rosemary Harris, as the sweet but occasionally frail Aunt May, do justice to the roles, as does James Franco as Harry Osborn, Peter’s friend and later roommate.

Overall, I loved Spider Man. Where it’s good, it’s very very good. Where it falls down, it doesn’t so much disappoint as it fails to match the rest of the movie. As far as pure story goes, it’s primal Spider-Man, essence of character boiled down for a new audience, and that’s what matters. Go see this and have some good old-fashioned superheroic fun.