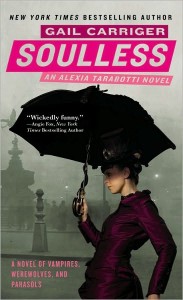 Miss Alexia Tarabotti is not your average young lady. At twenty-six and unmarried, her chances of finding a prospective husband are almost nil. Worse still, she’s half-Italian and her coloring quite definitely takes after that side of the family. Olive skin is -so- out, after all. Worst of all, she has no soul. As a so-called, and extraordinarily rare, preternatural, she can negate the supernatural qualities of werewolves and vampires with but a touch, a fact she keeps to herself as much as possible. After all, proper ladies don’t go around touching the undead willy-nilly, no matter how accepted they are in British society.

When a strange vampire attacks Alexia at a party, she quite sensibly defends herself, accidentally staking the vampire in the process. The ensuing mess brings her into contact with Lord Maccon, a Scottish werewolf who works for the Bureau of Unnatural Registry, who’s had a bone to pick with Miss Tarabotti ever since a certain incident involving a hedgehog. This sets off a bizarre and unconventional series of events involving Alexia, Lord Maccon, an American scientist, and the so-very-flamboyant vampire Lord Akeldama. It seems that packless werewolves and solitary vampires have been disappearing, while fledging vampires are turning up with disturbing frequency, their origins a mystery. When people try to kidnap Alexia, Lord Maccon decides to see to her protection personally. But can they stop arguing long enough to figure out what’s going on? And at what point will propriety be thrown out the window in favor of expediency?

Soulless is charming, whimsical, and splendid. Part comedy of manners, part Regency send-up, part urbane fantasy, part alternate history, part steampunk, it’s a beautiful blending of disparate elements that’s bound to appeal to a wide range of readers. With its wry, tongue-in-cheek tone and a thoroughly plausible worldview, it’s easy to fall into the story and get swept up in the action. Alexia Tarabotti is a heroine to admire, a saucily-independent, feisty young woman who addresses every situation with her unique mixture of common sense and proper manners. Her constant foil and occasional romantic interest, Lord Maccon, is a gentleman and a werewolf, and it’s no wonder that opposites attract and sparks fly every time they’re together. (Honestly? Miss Tarabotti and Lord Maccon are one of the cutest, most adorable, most entertaining, most natural couples I’ve seen in a long time, and their interactions fill me with a glee bordering on guilty pleasure.) Lord Akeldama makes for one heck of a memorable supporting character, stealing every scene he’s in with a colorful swish that would be the envy of any drag queen, while still maintaining that immortal presence one expects of a centuries-old vampire.

This book overflows with a sense of wonder and unapologetic playfulness, starting with the first page (…she had retreated to the library, her favorite sanctuary in any house, only to happen upon an unexpected vampire…) and continuing right up to the very end. In lesser hands, the clever banter and self-aware tone could have been cutesy, twee, or just plain groan-inducing; Gail Carriger rises above those pitfalls to give us something rich and delightful and thoroughly appealing. I simply must insist upon more, and the sooner the better.