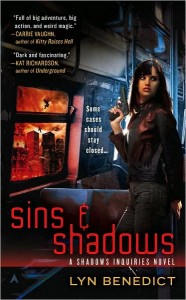 Sylvie Lightner runs the Florida-based Shadows Inquiries, a small firm which investigates the decidedly weird aspects of the world. That is, until she sees a friend and employee killed in front of her. Tired of killing monsters and becoming one herself in the process, and afraid she’ll get someone else she knows killed, she decides it’s time to shut up shop for good. But even as she’s turning out the lights, a cop named Kevin Dunne muscles his way in, accompanied by a trio of attitude-laden women. Claiming that he’s the Greek God of Justice and his companions are the Furies, he wants to hire Sylvie to find his lost lover, and refusal is not an option. Reluctantly, Sylvie takes the job, only to discover that things aren’t as they seem. Sure, Dunne is the God of Justice, but he’s not the only god involved in this mess. oh no. Something deep and rich and complicated is afoot, involving monsters and gods, mortals and immortals, and poor Sylvie is right there in the middle. Sylvie will have to call in her allies, and forge tenuous truces not just with one of the Furies, but also with Demalion, the agent of a secret government agency formed to deal with the supernatural. Can she trust either of them when the chips are down? Or will their previous loyalties win out? Before all is said and done, Sylvie will discover some hard truths about the world, about her own heritage, and about the lives and deaths of the gods.

The start of a new series, Sins & Shadows comes out of the gate at full speed, and doesn’t slow down. Lyn Benedict delivers one hell of a powerful expertly weaving Greek, Egyptian and Christian lore and traditions together before tossing them into a modern setting. She’s managed to find her own little niche in the crowded world of paranormal investigation stories, populating it with memorable characters and a compelling mystery. I have to say, I love the depth of characterization and personality granted to Erinya, one of the Furies. Though just a supporting character, she steals the scene whenever she’s around to growl and stomp and exude pure attitude. Sylvie herself is a tough cookie, one willing to boss around gods and monsters alike to get the job done.

It’s obvious that this will be another fun urban fantasy series, and I’ll definitely stick around to see what’s in store for Sylvie Lightner in the future. She’s made some powerful friends and enemies in Sins & Shadows, and there’s plenty of potential for additional adventures, and evidence that her back story needs exploring as well. Here’s hoping we see more soon.