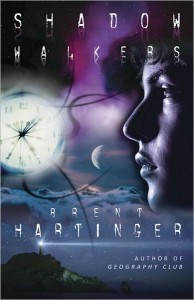 As a gay teenager living with his little brother and grandparents on an island community of only 4,000, Zach feels like an outsider, relying on the Internet for peace of mind and interaction with the outside world. When he’s grounded for forgetting to take out the trash, and denied Internet privileges, his desperation for diversion leads him to attempt astral projection. After he tries and fails, he puts the whole thing out of mind, even though the woman at the New Age store totally swore the special incense she gave him would help next time. And then Zach’s little brother, Gilbert, goes missing, and Zach once again tries to astral project in the hopes of finding him. This time, it works. In the astral realm, Zach can track his brother and his kidnappers, but can he find a way to alert the police before something bad happens? Luckily, in the process, he runs into Emory, another astral projector who’s much better at it … and apparently into Zach as well. Together, they can try to save Gilbert and give one another strength and comfort. That is, if the dark creatures stalking the astral plane don’t get them first.

There’s a lot of raw emotion and adolescent fervor woven into the pages of this relatively short roller coaster of a tale. Zach comes off as pretty high-strung, especially once the subplot regarding his little brother kicks into gear and he gets caught up in the tension of the moment. He and Emory hit it off with genuine chemistry, although something about the pacing seems a little off, even rushed. One can chalk it up to the excitement and adrenaline of the situation, but it still feels like they needed more time before reaching the depths of connection that they did. I’ll be honest: I never really bought into the astral projection element as a compelling factor in the story. As a metaphor for escaping one’s bounds and limitations, it’s dead-on perfect and applicable to the characters. At the same time, it fails to capture me as a reader. Certainly, the logic in which Zach decides to use astral projection, which he doesn’t even believe is real and has never successfully accomplished before, as a tool for finding his missing brother, requires a certain leap of faith on the reader’s part, lest the whole thing collapse. Of course it works, and of course the only other person he meets on the astral plane who isn’t trying to kill him, turns out to cute, gay, single, and of the right age. This is a good book, and I’m thrilled to see a YA paranormal featuring a gay teen and a hint of romance, but as a paranormal story goes, it never quite gels. I think it could have benefited from expansion; with a more leisurely plot, a less frantic atmosphere, and a less pressing deadline, this could have been great instead of good. It’s still a nice change of pace, and maybe we’ll get to see these characters again under less intense circumstances, and get to know them better.