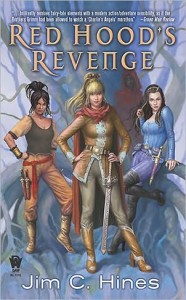 They are the secret protectors of the kingdom of Lorindar. Snow White, the sultry mistress of mirror magic. Danielle, wielder of a powerful glass sword, once known as Cinderella. Talia, whose fairy gifts make her a powerful warrior, but whose past as the legendary Sleeping Beauty still haunts her. Princesses all, and the best of friends, they’ve been through a lot together. But when Roudette, the assassin also known as the Lady of the Red Hood, targets Talia for death, the three are once again forced into action. Their struggle to defeat Roudette and end the threat to Talia once and for all takes them to Arathea, Talia’s desert homeland, where the queen who usurped her throne still waits, planning revenge. For the Prince who awoke Sleeping Beauty didn’t do so with a kiss, and he was certainly no Charming, and Talia’s bloody revenge has had long-lasting consequences.

In Arathea, the three princesses discover a grave threat to the land, one involving both the infamous Wild Hunt and the capricious fairykind. To survive, they’ll have to trust in the Lady of the Red Hood, even though her loyalties are decidedly in question. Talia’s home, but she may not live long enough to enjoy it. Not everyone gets a happily ever after….

Continuing to reimagine the heroines and storylines of beloved fairy tales, Jim Hines turns his attentions towards Little Red Riding Hood, reinventing her as a dark, tragic, driven anti-heroine out to exact her own revenge upon those who once wronged her. Here, we see one explanation for the wolf in Grandmother’s bed, the significance of the titular red cape, and learn that the huntsman of the story was no hero. We also get a much more in-depth look at the land and circumstances that shaped Talia, who deviates significantly from her fairy tale origins. And the changes couldn’t be more welcome. Some might say it’s pretty bold to turn Sleeping Beauty from the blond waif of Disney fame into a lesbian warrior from a pseudo-Arabic culture, but it just helps to reinforce the idea of these fairy tales as universal stories, where the trappings may change but the core remains the same. What matters is that Talia, like the others, is a strong, capable, princess who isn’t about to sit around waiting for her prince to show up and rescue her.

Combining the best parts of fantasy and folklore, mixed with action and adventure, tinged with horror (just like the original stories!), Red Hood’s Revenge is a thoroughly satisfying continuation of the series, and a worthy updating of these cultural icons. They may not sing and dance, but they can certainly kick some ass. Bring on the Snow Queen.