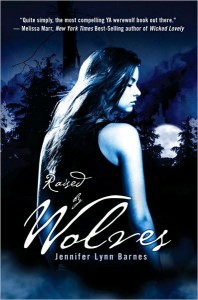 Bryn’s never had what you’d call a normal life. Her parents were killed when she was young, and she was raised by Callum, Alpha of a werewolf pack. A human among wolves, Bryn’s taken special delight in challenging the rules and testing her limits. She may be part of the pack, but she’s always held part of herself back. However, when the pack takes in a mysterious young man named Chase, Bryn’s immediately and inexplicably attracted to him. Is it because, like her, he’s survived a rogue werewolf, or is it just teen hormones? It doesn’t help that she has to stay away for her own safety while Chase adjusts to being a newly-minted wolf.

As Bryn and Chase grow closer, Bryn does whatever it takes to be with him, obeying pack rules and giving up some of her precious individual freedom. Then something strange happens, leaving the two bonded as a pack of two, and from then on, they’re on their own. Exiled from Callum’s pack, they have to find a way to make it on their own, which involves hunting down the Rabid werewolf who destroyed both of their lives. What they’ll discover in the process will rock Bryn and Chase to the core, and change the face of werewolf society.

As werewolf books go, this one’s pretty good. It’s hard by this point to do something really different involving werewolf packs and cross-species romances, but Barnes injects the setup with enough little twists and surprises to keep it interesting. Where she shines, of course, is in the characterization. Bryn makes for a believably strong-willed, stubborn, dynamic character, and Chase works well as a foil for her. Callum performs his role as father/authority figure to perfection, while Bryn’s best friend Lake rounds out the mix. The mythology is solid and the mood just right for the material, making this a better-than-average example of the werewolf sub-genre. Worth a look.