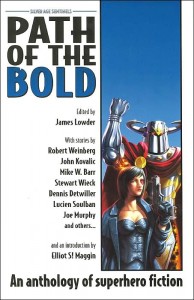 I have a weak spot for well-done superhero fiction. Done properly, it can capture the best aspects of the comics, while adding a whole new level of narrative sophistication. That’s why I was pleased to see this collection, a followup to Path of the Just, the first anthology based on the Silver Age Sentinels role-playing game. Fifteen stories in all explore a world where four-color superheroic action is an everyday occurrence. Mostly set in the mythical game setting of Empire City, these tales examine superheroes on and off duty, looking at them as icons and as fallible beings. One of the best aspects of this collection, in fact, is that it just as often deals with the effects superhuman beings have on the world around them, as it does with world-shaking crises.
This mixture of stories gives the authors a wide range of themes to choose from. For instance, Dennis Detwiller’s “Real Life” looks at the changes a smalltown superhero with a single, simple power, must make when he moves to the big city and ends up at the bottom of the hero hierarchy. What makes a hero when they have so little to offer? Steve Crow’s “Timelines” asks the same question from a different viewpoint. A man with the ability to study multiple timelines has forseen something tragic, which only he can stop, but the cost may be more than he can handle.
David Snyder’s examination of teenage angst and parent-child relations in “Capes and Corsages” is both entertaining and all too familiar. Take away the capes, and what child of a single parent hasn’t worried about their parent remarrying? Superstrength or teleportion can’t fix that sort of problem. James Lowder presents us with a skewed look at heroes, villains, and the comic book industry in “Fanboy,” a somewhat offputting tale about a young man with too much enthusiasm, an exceptional power, and a distinct lack of patience and maturity.
Whitt Pond delivers unto us a delightfully snarky, if somewhat deceased, heroine and her bizarre batlike companion in “Dead Girl Talking.” The interaction between the two, and with the real superheroes they encounter, is priceless. Lucien Soulban’s contribution, “Forever Young,” adds a strangely literary and fantastical element to a superheroic world, mixing Russian myth with a flying youth named Pan, and shaking things up quite a bit. In “Sidekicked” by Jim C. Hines, a rookie superhero is forced to come into her own when her mentor/partner is temporarily laid up out of action. “Monsters” by Christine Morgan is an introspective tale of someone whose monstrous exterior has given them nothing but a hard life, at least until they’re given a new chance.
Mike W. Barr’s “The Judas Silver” is actually a detective story, a whodunnit, with superhero trappings, and a few red herrings. John Sullivan’s “One Step From The Light” explores the nature of revenge, and the value of vengeance, as well as the impact one life can have on many. Even among superheroes, there are levels of acceptability and accountability. In “The Shield of Little Italy,” Alex Kolker’s protagonist is forced to make some difficult decisions involving his chosen protectorate. For years, The Shield has guarded one small section of the city exclusively, but then he’s called upon to serve a greater purpose. Will he turn his back on his home to save the city? Stewart Wieck’s “Either Will Suffice” looks at the heroes and villains of risen Thule, a newly-resurfaced lost civilization. (This is, I assumed, something described and explained in the game itself, since this anthology doesn’t go into too much detail about its origins.) “Enter, The Eradicator!” is a story about strange alliances by Robert Weinberg, featuring his character Sydney Taine (last seen in Nightside, a miniseries published several years ago by Marvel Comics.) Joe Murphy’s “R.A.O.K.” unites three very different people into a team that is definitely stronger than any of its components. John Kovalic examines the impact real superheroes would have on the comic book industry in “SF,” ending the volume on a rather wry note.
Path of the Bold is stronger than its predecessor, with more satisfying stories, and a better range of exploration in general. It proves that it’s still possible to produce good superhero fiction, hopefully paving the way for more like it in the future. Again, my only complaint is that sometimes I don’t get enough feel for the setting itself, which strikes me as the bastard child of New York and Vancouver, if such a thing is possible. Also, the “signature characters” they allude to on the back sound fascinating, and yet the stories within barely touch upon them, which might be frustrating for a reader who hasn’t also read the RPG source material. That aside, if you like comic books or superheroes, and larger-than-life stories, this is a near-perfect collection.