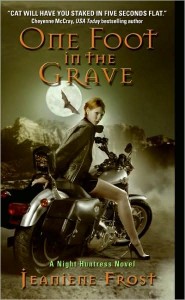 Four years after faking her death in order to go work for the government as part of a new secret team dedicated to hunting rogue vampires, half-vampire Cat Crawfield has almost, but not quite, managed to put the spectre of her ex-lover and former mentor (and full vampire) Bones behind her. In fact, she’s managed to put most of her past behind her as well, moving on with her life. She has a crack team backing her up, the legend of the Red Reaper making many vampires lock their coffins at night, and she’s even considering the idea of dating again. And then someone starts targeting her, leaving taunting clues that make it quite clear that they know who and where she is. It seems that not only has someone put a bounty out on her head, but someone from her past may have sold her out. Is it Bones, toying with her in revenge for the way she ditched him, or something far worse?

The truth is, there’s a lot more going on than Cat expected, and the only one she -can- trust is Bones, who shows up unexpectedly, slipping right back into her life and her heart and driving her crazy. Now she has to choose between the handsome mortal veterinarian she’d been dating, and the vampire who sets her senses on fire. Of course, her team might think she was consorting with the enemy, and her mother would have a heart attack if she knew her daughter was once again spending time with a vampire… Bones’ involvement goes far beyond simply winning Cat back into his arms. He’s got an old score to settle with the vampire who sired him long ago, and a complicated plan to get that bounty off Cat’s head, and it’ll take some quick thinking and heavy action to pull it off. In the process, Cat will learn some painful truths about her family, which may cause her to reconsider her line of work, and her motivation. Luckily, Bones is there to give her all the encouragement she needs, if she can just keep Bones and her team from hurting one another to badly…

When I covered Halfway to the Grave, I saluted Jeaniene Frost for the way she was willing to shake up the status quo at the end of the book. Here, we see just what a shakeup it was, with a four year jump in the timeline, giving our heroes time to change and gain more experience, and discover just how much they really mean to one another. Cat’s thoroughly established herself as the leader of a secret government team, and Bones, well, he’s been taking care of business in his own way. Frost took something of a gamble, letting such a length of time pass between books, and luckily, it pays off quite nicely indeed. Cat’s confident, strong, fierce, and a leader in her own right, able to face Bones as an equal, as opposed to the mentor/student relationship they had when they first met. The emotional connections between the two would-be lovers is stronger than ever, with sparks flying at every turn, and when they get physical, it just about sets the page on fire. Apparently, the elapsed time, and Cat’s change of professions was good for them both.

The plot itself keeps moving at a breakneck pace, as they deal with one crisis after another, delving deeper into the murky world of the undead as they go. We learn a lot more about the power structure of the vampire society, as Bones puts a plan into motion that requires a pretty hefty commitment from Cat, as well as a major load of trust on everyone’s part. All I can say is that things will be even more interesting when the next book comes out, since once again, Frost throws some twists into the mix.

There’s a lot to love about this series. The heroine is strong and sympathetic, a vampire slayer that would give Buffy a run for her money, and Bones is ten times cooler than most of the whiny, brooding vampires one expects to see these days. Together, they’re an irreverent, asskicking couple to set fear into the hearts of their targets. (And one scene late in the book, where Bones reveals just why and how he convinced Cat to make a very unusual choice with regards to her choice of outfit while hunting, is laugh-out-loud hilarious. The sheer audacity of the man is beyond belief. Of course Cat’s just as bad in her own way, when she demonstrates a unique ability to grab a vampire’s attention in a club.) The action scenes are sharply-described, easy to visualize, and seem tailor-made for the big screen; this is one book that seems perfect for television. There’s action, humor, romance, intrigue, and of course a little bit of red-hot sex to really spice things up. In other words, it’s my idea of an excellent urban fantasy/paranormal romance, and an example of how to do vampires right.

I’d be remiss if I didn’t mention the cover. Like the one for Halfway to the Grave, it’s a striking, gorgeous piece of art, leaping out at the viewer and catching the eye. I’ve seen a lot of covers I really liked, but very few that are so captivating. Tom Egner (or so my research tells me) has done a masterful job with the covers for this series. This goes on a very short list of ones I’d get as prints if I had the opportunity.

If you want good vampire urban fantasy, with a strong, kickass heroine, then One Foot In The Grave is definitely one I’d reccomend without hesitation. Frost is clearly on a role with this series, and I hope she keeps it up.