You know what’s even more amazing than seeing your story in print?
Hearing it read out loud as part of an audiobook.
Seriously. The knowledge that such a thing exists, that someone has brought your words and worlds to life, given them voice and substance, is simply amazing. I know it’s old hat to many of my writerly brethren, but I get a thrill every time I run into a new audio adaptation of something I’ve done.
To date, five anthologies I’ve been in have received such treatment. Of course, as my luck would have it, all five are erotica anthologies, but I’m not picky. If they want to turn my smut into porn for the ears, I’m game.

The first of these is “The Long Night of Tanya McCray,” from Lustfully Ever After, edited by Kristina Wright, in which an intrepid photographer gets lost in Puxhill’s mysterious Gaslight District overnight. Sadly, the narrator for this volume is…underwhelming, and doesn’t really do the material justice, in my opinion. But hey, these things happen.

A better example is “In the Service of Hell,” from Seductress, edited by D.L. King, which features a succubus on a mission from her infernal masters. Kaylee West does a very nice job of bringing “Alice” and her target to life, adding a quiet nuance and complexity to their exploits.

Then there’s “Love on a Real Train,” from Girl Fever, edited by Sacchi Green, which sees a pair of lovers recreating an iconic scene from a classic ’80s movie. The narrator for this story (one of several who take on the Herculean task of reading the 69 stories) imbues my movie-obsessed characters with a sense of playfulness and sensuality. I can’t shake the sensation that the narrator is about ready to let a giggle slip free. It’s a quick, fun, listen. 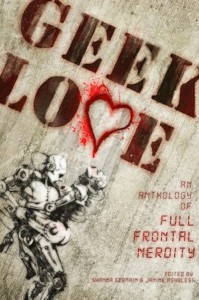 Kaylee West makes a second appearance to narrate “Thwarting the Spirits” in She-Shifters, edited by Delilah Devlin, which stars a werecobra and weremongoose as moon-crossed lovers and mortal enemies. Though her performance is a little shaky at times, I was absolutely delighted by the way she gave the characters distinct voices and accents. (Important when one’s Indian, another’s Pakistani, and assorted other folks pass through as needed.) Most importantly, she gets the attitudes and pronunciation just right, just the way I hear them in my head. In fact, I never even imagined wereraven Izzy Sparks with a bit of a country drawl, and now I’ll never be able to unhear it. Possibly my second favorite audio adaptation to date.

Lastly, there’s the incomparable Veronica Giguere, who narrates “The Secret Life of Ramona Lee” in Geek Love, edited by Shanna Germain and Janine Ashbless. Her interpretation of the story and the characters is almost transcendent in its awesomeness. The way she handles the titular Ramona and her new friend, the information sprite Irene, blows me away. There’s depth and complexity, playfulness and a certain breathy glee. I just about fell in love with my own characters after listening to them…awkward, right?

So there you have it. Not only can you read my stories, you can even listen to a few of them if you’re feeling adventurous.