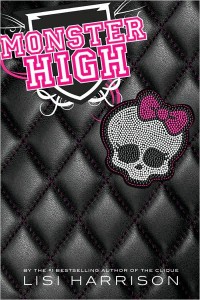 When her asthma got too bad for Beverly Hills, Melody and her family moved to the fresher air of Salem, Oregon. Here, at Merston High, she can do her best to fit in and feel like less of an outcast in her beauty-obsessed family. Meanwhile, Frankie Stein, fresh from an intensive bout of home schooling, is ready for the full high school experience. What no one knows, however, is that Frankie’s the pride and joy of her parents … or rather, of their laboratory. They built their teenage daughter from scratch, following the family tradition.

It turns out that Merston High’s got a whole lot going on under the surface, with an entire community of monsters-in-hiding sending their disguised kids to school there. Vampires, mummies, werewolves, mad scientists, you name it. And while the younger generation may chafe at remaining hidden, their parents are adamant that things stay as they are. So will Frankie and Melody be the wild cards who upset things?

While there’s a good concept here, the plot is weighed down quite heavily by incessant pop culture references and product placements, so that we can’t go a page without someone mentioning Lady Gaga, Prada, Facebook, YouTube, or Gucci. The tongue-in-cheek naming conventions and airhead attitudes likewise work against the overall appeal. It’s a great bridge between the subgenre which spawned books like the Clique and A-List series and more substantial works, but it feels pretty awkward. There’s a lot of untapped potential, and hopefully future installments will see fewer commercials and a stronger story.

After I wrote the above, I did a little research, only to discover that this was based on a series of webisodes, themselves inspired by a line of toys from Mattel. This explains a lot, but also means we have a product tie-in that doesn’t go out of its way to alert those not in the know (yours truly, shopping the wrong aisles as always), and which actually comes off as inferior to the more stylized webisodes. Like some of the characters themselves, this book is suffering from a real identity crisis.