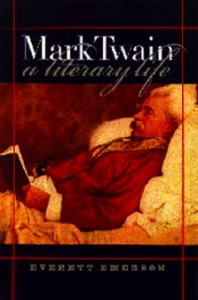 “Mark Twain endures. Readers sense his humanity, enjoy his humor, and appreciate his insights into human nature, even into such painful experiences as embarrassment and humiliation. No matter how remarkable the life of Samuel Clemens was, what matters most is the relationship of Mark Twain the writer and his writings.”
So begins Mark Twain: A Literary Life, a scholarly yet welcoming volume which takes on the task of studying the man and myth of Mark Twain — not Samuel Clemens! — and looking at the man’s writings in the context of his actual life. In short, it juxtaposes the literary output of Mark Twain with the life experiences of Samuel Clemens, in an attempt to understand, and to better appreciate.

I must say that Emerson has done his homework. Insofar as I can tell, this book is meticulously researched, thoroughly documented, painstakingly put together, and near-obsessively written. It’s a paradoxical book, much like the subject matter. On the one hand, it comes off as an extremely scholarly book, or an extended research paper. It quotes rampantly, frequently, and eagerly from hundreds of sources, including Twain’s books, Clemens’s personal letters, and just about everything else under the sun related to the topic at hand.

Further footnotes direct the reader to a most extensive bibliography, more notes, and an index. The bibliography itself is divided into categories like “Manuscripts by Mark Twain,” “Published works by Mark Twain,” “Personal letters of Samuel Clemens,” and ten pages worth of “Secondary works.” In short, the sheer amount of material consulted and collated to produce this book is staggering.

On the other hand, we have the book’s attempt to stay friendly and open, trying to retain its readability amidst the footnotes and quotes. For the most part, it succeeds. I read the majority of the book while waiting in the veterinarian’s waiting room, and was hardly bored at all. And trust me, if a book doesn’t bore me, it can’t be all bad.

The book follows a roughly chronological path, with the chapters dividing his life into easily-swallowed morsels, usually marked by a change in lifestyle, a change in residence, or the publication of one of Twain’s major books, such as Huckleberry Finn, Connecticut Yankee, or Tom Sawyer.

It details Twain’s attempts to justify his personal views on politics, race, and the world around him through his writing, and helps us to understand why he included some things in his books and left other things out. One fascinating segment follows the writing and rewriting of Huckleberry Finn, pointing out the numerous incongruities, flaws, and internal errors that came about as a result of rewriting and changing his mind halfway through.

A Literary Life is certainly that. It’s not a biography, but neither is it a pure study of Twain’s works. Instead, it’s a hybrid, sometimes awkward, sometimes unique. If you like Mark Twain at all, this is probably a useful addition to your collection.

Is it a great book? Maybe not. At times it does drag, and the sheer number of quotes and citations does lead one to wonder how much of the work is Emerson’s, and how much is just regurgitated from a hundred other sources. Of course, as Emerson is described as being a Professor of English, Emeritus, at University of North Carolina, Chapel Hill, and as the author of several other books concerning Mark Twain, and is the founder of the Mark Twain Circle of America, I guess we can acknowledge him as the expert on the matter.

It is important to note that he doesn’t seek to idolize or worship Twain. He freely admits when Twain is being racist, nationalistic, or even “obtuse and pretentious.” Mainly, Emerson offers facts. Facts backed up by solid historical documentation, wherever possible. Yes, the who’s and why’s and where’s are all there in black and white and photographs. This is that rarest of biographies, an honest one.

I’ll gladly give this book a thumbs up. The casual reader may be stymied at points, or bored by the material, but for Twain readers and aficionados, it’s a good add to the bookshelf.