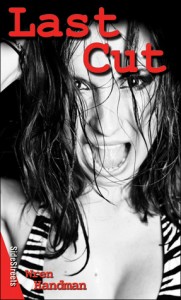 Caitlin Myers is a teenage actress who desperately wants to be a superstar.  When she gets the chance to audition for a local B-movie slasher flick, she leaps at the chance.  She’s thrilled when she wins the role, though less so when she learns it’s as a bikini babe who spends way too much time showing way too much skin.  Nevertheless, she allows ambition to override common sense, and accepts the role.

Two problems: She’s 16, and her mother won’t let her take the time off school to do the film.

Solution: Caitlin starts lying.  To everyone.  She tells the people doing the movie that she’s 18 and, you know, totally legal. And she plays her separated parents off against one another to create the alibis needed to skip school and follow her dreams.  She lies to her friends about the quality and prestige of the film and the fun she’s having.  She lies to her boyfriend about the same things, and how she’s feeling.

The work is long and hard and exhausting.  It’s also more than a little sleazy and unsettling.  And when they ask her to take her top off, she naturally balks.  But faced with pressure, she caves and does the nude scene.  Later, after second thoughts, she changes her mind and tries to have the scene removed.  Fat chance.  It’s there to stay, and her contract won’t allow for her to object further.

Faced with no other way out, Caitlin reveals her true age…and that’s when the house of cards collapses all around her.  As the lies stand revealed, she’s faced with upset people on all sides: parents, friends, boyfriend, director and producer….

Here’s where I’d normally leave you with the dangler, and you’d accept that, secure in the knowledge that, having reached Act 2 or 3 in the story, we’d thus be looking forward to Caitlin’s eventual redemption as she climbs out of the hole she’s made for herself.  Unfortunately, that’s not the case.  Last Cut as good as ends with our heroine at her lowest point and we’ve no idea what happens next or how she deals with the fallout.  And while I am opposed almost to a fault when it comes to spoilers in my reviews, it’s hard to talk about a book that ends halfway through a character’s journey otherwise.

Caitlin herself puts it best, when she says, “I have a feeling this is going to bite me in the ass.”  As the narrator, she’s supposed to have qualities to which we can relate. Instead, we’re treated to the thoughts of a selfish, self-absorbed, high-strung dive, a compulsive liar who barely thinks ahead unless it’s to count her Oscars in her imaginary future. She alternately uses, lies to, and ignores her friends, and is surprised when they turn on her. She pits her parents against one another in a heartless display of emotional manipulation and outright falsehoods.  And yeah, I’ m not going to say that the director of the movie is a paragon of virtue, demanding T&A for his low budget slasher flick…but in his defense, he thought she was of consenting age and understood her contract. He may have been a jerkwad, but he didn’t deserve to have Caitlin torpedo the whole production with her illegal, underage showboating.

That’s not all. Caitlin spends the entire story being jealous of a newcomer, a talented actress who transfers to her school and who actually dares to compete with her for the choice roles.  At no point do we ever get any impression that Lianne, her competition, is anything other than a genuinely decent person, but Caitlin goes wild with jealousy and hatred at every turn.  No wonder her friends are ready to ditch her; Lianne probably seems like a breath of fresh air after all that.  Caitlin also quits her job with no notice, to go work on the film…good luck getting a reference after that!  Doesn’t she know that most actors wait tables in between gigs anyway?

Perhaps if Last Cut actually had a second half, the one where Caitlin actually dealt with the consequences of her actions, made amends, and displayed some personal growth, I wouldn’t be quite so critical of this story.  After all, it’s standard procedure that when you bring your hero low, it’s to build them back up again.  We want to see how the protagonist presumably comes out of the experience as a better person.  Here, we see Caitlin act horribly, alienate or upset everyone she cares about, and ruin her career, and that’s about it.

It’s a shame; I wanted to like this a lot more than I did.  Lorimer’s SideStreets line of edgy, “fast-paced, high interest” books for reluctant readers really seems like a great thing, full of potential.  A quick scan of other offerings displays a wide variety of situations and topics, diverse characters, and realistic slices of life.  However, they all aim for the 30k word count, which is a pretty tight range for something aspiring to be a book.  I’m not sure Last Cut makes the best use of its space.  (That, and the overly authentic teenspeak, both in narrative and dialogue, started to grate after a while.  As in, “Plus, I don’t think she gets that sometimes kids have to be like, grown up and stuff.”)

In short, I applaud the overall aim of the line of books from which this sprung, but I still feel like I only got half a book featuring a wholly unlikable, unsympathetic character whose ambition got the best of her, and no true resolution.