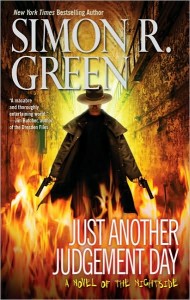 The Nightside — that secret dark part of London where it’s always 3 A.M. and anything goes — may have survived the Lilith War, but the slaughter of its Authorities has led to a new group of people taking up the reins of leadership. Some of the Nightside’s best and worst inhabitants, all prominent and all powerful, have taken it upon themselves to run the place, but their reign may be a short one. The Walking Man, the unstoppable instrument of God’s wrath, has come to the Nightside, for the sole purpose of killing the Authorities and razing the Nightside to the ground. Guess who gets tapped to try to resolve this situation? John Taylor, that’s who. He’s a private detective who’s handled the weirdest, nastiest, most suicidal, most insane cases the Nightside has to offer, and they think he’s just right for the job.

So with his partner, the terrifyingly indomitable Shotgun Suzie, John sets out on another series of messy, violent, bizarre adventures through the Nightside. They hit the Guaranteed New You Parlor, where socialites and celebrities get the ultimate in makeovers and preventive plastic surgery, and when it hits back, they hit harder until things stop moving. They visit the Adventurers Club, where the boldest and bravest of the Nightside hang out between expeditions and escapades… and when an unwanted visitor brings chaos and destruction, they give the place an extreme makeover, Nightside style. And then it’s on to the Street of the Gods, where you can find any sort of religion you want, and the badlands, home of the Nightside’s only rogue vicar, and to the Gun Shop, where every weapon ever created can be obtained, for a price. And all of it, from one encounter to another, leads up to the final, climatic confrontation with the Walking Man. How can you stop a man who, by his very nature, can’t be stopped? It helps if you’re John Taylor.

I have to be honest. After nine books in this series, it’s hard to find new ways to say the same things I feel about every new installment. Bloody, brutal, stylized, extremely over-the-top, wildly inventive and always entertaining, the Nightside series has become a guilty pleasure, the sort of series that hits a great many of my “Awesome buttons.” Simon R. Green has such a great way of creating these characters with fairly broad swipes of the pen, imbuing them with defining characteristics and turning them loose as exaggerated heroes and villians, often free of subtlety or surface nuance. Though, to be fair, John Taylor, and Shotgun Suzie, and some of the others closest to them, have developed a lot of depth and complexity over the course of the series, with the slowly developing relationship between John and Suzie becoming more and more fascinating as it deepens.

When you get right down to it, there’s no one quite like Simon Green, and nothing quite like the Nightside. A number of urban fantasy series may come close in their own way, evoking one aspect or another, capturing some of its tone, but in the end, the Nightside is one of a kind. Just Another Judgement Day is a perfect representative of this series; the title alone sums up the prevailing attitude that in the Nightside, even the Apocalypse can become routine, though never dull. It’s interesting that Green seems to indeed be setting things in motion, aiming the series towards an Apocalyptic future John once glimpsed but thought he’d since prevented. Clearly, he’s got something planned, and I aim to be here when it hits. Just Another Judgement Day may be just another Nightside installment, but it’s awesome all the same, and I certainly wasn’t disappointed.