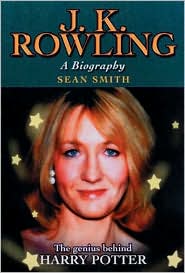 Thanks to the phenomenal popularity of the Harry Potter books, J.K. Rowling has achieved a fame seldom attributed to authors, especially those who write children’s books. Ironically, as Sean Smith points out, Rowling is someone uncomfortable with fame, the sort to shun it when possible and downplay it at other times, reluctant to ride the popularity train. A private, even shy woman, she’s chafed at being in the public eye ever since the papers first started focusing on her. But why shouldn’t they? Her story is an inspiring, fascinating one. Divorced, impoverished mother of one writes best-selling book in a cafe, making a cup of coffee last for hours, while her infant daughter sleeps. Living in an unheated flat, barely able to make ends meet, thoroughly screwed by a system ill-designed to help the poor overcome their circumstances, single mother shatters all expectations and becomes a millionaire practically overnight. Who doesn’t love an underdog?

However, while some of that is true, other parts have been exaggerated by the press, or purposefully obfuscated by Rowling herself, in an attempt to preserve some small part of her private life. Smith carefully and thoughtfully follows her from the beginning, when her parents met aboard a train, all the way up to the release of Harry Potter and the Goblet of Fire laying out each stage of her life, debunking myths and elaborating on truths as appropriate.

Normally, I’m not a fan of biographies written about the living; it seems like an incomplete story to write about someone’s life and stop before it’s over. However, Smith does a good job of chronicling Rowling’s history to date. It’s scholarly, entertaining, and detailed. As he traces each segment of her life, following the course of her family and education, he goes into great detail, supplementing with quotes and interviews from those who’ve known her. This isn’t just about Joanne Rowling, it’s about the genesis of the Harry Potter books, of the life and literary influences that shaped Rowling. Sure, we might guess that certain similarities to Tolkein exist in her books, but who could guess that the biggest influence on her work was Elizabeth Goudge’s Little White Horse? Or that despite comparisons to Roald Dahl, he’s not one of her favorite authors? And then there are the influences of Jane Austen, and Kenneth Graham.

Not only does Smith look at Rowling, but he looks at those people who played a part in her upbringing and education, influencing her for better or worse, even pointing out where one teacher inspired Snape, another contributed mannerisms to McGonagall, a third the basis for Dumbledore. Where certain character or place names came from. How Harry Potter and Hermione Granger both represent aspects of Rowling’s personality. He examines the people who played a part in her literary blossoming, looking at the first reader for Christopher Little Literary Agency, Bryony Evans, now credited in Rowling’s opinion as the one who really discovered Harry Potter. This isn’t about Rowling, so much as it is about the drive and process that brought her to where she is today. Friends, family, colleagues, schoolmates, her ex-husband, her daughter, her agent, her first publisher (who swore Rowling would never make any money from writing children’s books) and more.

As well-researched as any biography can be, J.K. Rowling: A Biography is certainly a stand-out in a field of instant-bios for people celebrating their fifteen minutes of fame. It’s detailed without being boring, telling a thorough story that doesn’t idolize the subject or whitewash her flaws. Joanne Rowling is just a woman whose talent for writing and for overcoming obstacles brought her to the right place, at the right time. Had she taken another path, had she been accepted into Oxford, or never gone to Porto, Portugal, or had she never just sat down and wrote, who knows what she might have accomplished?

If you want to see how J.K. Rowling grew up, was influenced, and ultimately became a literary sensation of a kind rarely seen these days, how she broke the odds and achieved everything she could have dreamed of and more, how she was inspired and in turn has inspired, than Sean Smith’s biography of her is a great place to start. Certainly, it strives for more accuracy than some, and attempts to remain honest in its attitude towards the subject, which may be the most we can ask of any biography. This is a must for any hardcore Harry Potter fan (though the writing and language may be beyond younger readers), and may prove inspiring for aspiring writers whether they’re fans or not.