As always, it is with great sorrow that I announce that yet another of the Feline Advisory Committee has selected for retirement after a long and successful career.

Pepper, or as she was known around the office, Peppercorn Spitfire, came to us when she was but a kitten, along with her brother Salt. They were an odd pair: he was large, sweet, fearful, and dumb as a brick. She, on the other hand, was small, shrill, sociopathic, and swift. She was not gifted with people skills; if you tried to pick her up, she could rabbit-paw and shred you like a psychotic blender. She never did socialize completely…but she learned to put up with us humans and our weird ways. She formed a tight-knit yet confused bond with the elder members of the cat tribe, and spent many fine hours cuddled up to them. 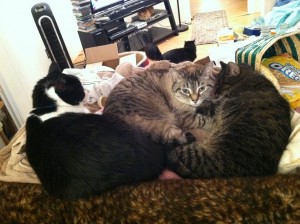 She was the sort of cat who demanded love on her own terms. She loved to be petted and would shriek happily, but the belly–oh, that belly was a TRAP. A trap filled with fish hooks and bear traps, and some of our finest scars come from getting to close to her…like, for her annual checkup at the vet. (“Break out the riot gear,” we’d advise them. “Pepper doesn’t do ‘friendly’.”)

But she was sweet, in her own way. A constant presence. Those big blue eyes, that lovely singing voice, those beautiful winter colors… we were convinced that her ancestry held both Siamese and mountain lion. She came from the hills of SW Virginia, and was almost certainly a little inbred, as strange things go on down in that part of the country. While she wasn’t the most active of participants, we always knew she was around somewhere, watching us and probably not approving. 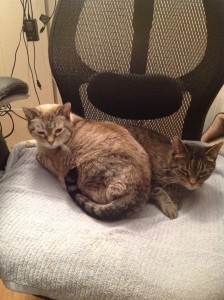 And with the rest of that older generation moved on, it was hardly surprising when she just sort of started to fade away. She went quietly, peacefully, and in the manner of her own choosing, with as little muss, fuss, and bother as possible. No final vet visit for her, just a night of cuddles. She waited until we’d gone to sleep, and then excused herself without so much as a note.

So long, Pepper. Give our regards to Salt, Stucco, Jane and Gabriel when you see them.