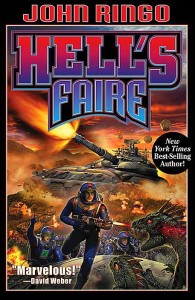 John Ringo brings to a close the first part of his Legacy of the Aldenata series with Hell’s Faire. Originally intended to be the final part of When the Devil Dances, the material in this book was delayed due to the events of 9/11, turning what was supposed to be a trilogy into a four book series. Luckily, Hell’s Faire doesn’t suffer for being forced to stand on its own; Ringo does a good job of recapping previous material and bringing readers up to speed.
As in the previous books, the alien race known as the Posleen are tearing apart Earth, and the only true organized resistance remaining is in America. The Appalachians are a blazing warzone as the best and brightest of the Posleen forces match their overwhelming numbers and technology against the cunning and do-or-die attitude of a bunch of humans. Michael O’Neal and his daughter Cally, Sergeant Major Mosovich, and the intrepid crew of SheVa Nine (nicknamed BunBun) are at the forefront of the last great push to save the world. It’s all-out action, huge explosions, massive ground battles and violent desperation, and when it’s all over, either the Posleen get Earth, or they get their tails handed to them.
Ringo’s a great new voice in the military science fiction field, willing to think big and throw out some audacious concepts in the doing. While this is the last we’ll see of this particular series for a while, I’m looking forward to whatever he does next.