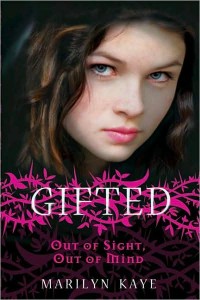 At Meadowbrook Middle School, they don’t come meaner or more popular than Amanda Beeson. What no one knows is that Amanda can’t afford to feel pity or empathy for someone, lest her consciousness inhabit their body for an unspecified period of time. One day, she slips, and wakes up in the body of Tracey Devon, school outcast with a bizarre secret of her own. Unable to reverse the effect, Amanda is trapped as a loser, forced to deal with Tracey’s problems. She’s not the only one at Meadowbrook with strange powers, and things will never be the same again. Not for Amanda, Tracey, or any of the others. Though a little simplistic at times, this start to a new series sets up an intriguing premise and lays the ground for some thought-provoking stories. I’ll be interested to see where Kaye’s going with this.