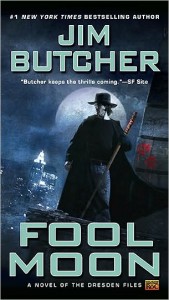 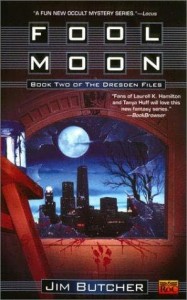 “I never used to keep close track of the phases of the moon. So I didn’t know that it was one night shy of being full when a young woman sat down across from me in McNally’s pub and asked me to tell her all about something that could get her killed.”

With those ominous words, Jim Butcher’s hard-boiled magician-detective returns for another two-fisted, guns n’ spells adventure. Once again, Chicago’s got problems, of the sort only Harry Blackstone Copperfield Dresden can tackle. As the only practicing wizard in the Chicago Yellow Pages, and one of the few occult specialists the beleaguered Chicago PD Special Investigations office can call on reliably, he’s no stranger to the unusual and the macabre. But business is slow, and his trust quotient with the police is at an all-time low, thanks to some messy business from months past. (See the first book of the Dresden Files, Storm Front, for details.) Tired of Ramen noodles, Harry can’t exactly turn down a job, no matter how messy it promises to be. When Karrin Murphy, head of the Special Investigations unit, suddenly arrives, asking Harry to help investigate some murders, he again finds himself neck-deep in someone else’s problem.

Before he knows it, Harry’s got his hands full with the mundane problems of the cops and the Feds, the underworld attentions of Gentleman Johnny Marcone and his criminal organization, the -very- underworld machinations of demons, the supernatural threat of werewolves, and the simple fact that no matter which way he turns, someone wants him dead.

But who? The White Council, near-mythical ruling body of Earthly magicians? The street gang of werewolves? Gentleman Johnny Marcone? The FBI, who have a deadly secret of their own? Tera, the feral wolf-woman who’s only trying to protect her lover? Harry’s own subconscious?

As Harry goes from investigating the murders to trying to prevent more, he discovers that nothing is as simple or straightforward as it seems. Even the deduction that he’s dealing with werewolves isn’t simple, as they come in all manner of forms, from hexenwolfen to loup-garou, from werewolves to lycanthropes. Some are easy to deal with, while some are unstoppable juggernauts of flesh-shredding destruction, fuzzy Cusinarts with unending rage. The stakes get higher, the body count mounts, and Harry himself ends up on the run from the police in a desperate race against the full moon.

Before it’s over, he’ll have turned over a few rocks that were meant to be buried, find himself tempted with a financially rewarding deal with the Mob, with information regarding his long-dead mother, and with a primal power that would allow him to deal with his enemies, at the cost of his soul. It’s never easy for Harry Dresden, and even if he survives, it’ll be at the cost of a valuable friendship.

There’s a lot going for Fool Moon. It combines the best of hard-boiled detective fiction with urban fantasy, in a way that few books can do successfully. The closest analogue would be Glen Cook’s Garrett, P.I. series, and even that’s not set in our own world. The Diana Tregarde books of Mercedes Lackey also come close, but without the same Hammett/Chandleresque tone that drives Fool Moon.

The complexity of the plots that weave through this book is impressive. It’s a multi-layered murder mystery sprinkled with red herrings, false trails, and personal goals. As soon as one answer is given, another question inevitably arises. And with Harry smack-dab in the middle and honor-bound to help, he’s driven to call upon resources he never knew he had, nor wished he’d found. He’s as complex and flawed a character as any Humphrey Bogart ever played, with that same world-weary ‘what now?’ attitude, and you know he’ll never give up until he’s dead.

Of course, there’s just enough left open at the end of the book to lay down plot threads for the next in the series, which will hopefully be forthcoming relatively soon, as it’s already under contract with Roc. We’re given a perfect satisfying conclusion, and you don’t need to read Storm Front to understand this book at all. Self-contained, but part of a series, it’s just right. I wholeheartedly recommend Fool Moon as an example of what happens when you mix genres properly. In a market increasingly dominated by media tie-ins and series beginning with “Star,” it’s a refreshing change of pace.