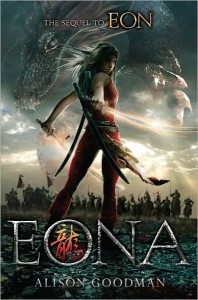 On the run after the death of the Emperor and the slaughter of her fellow Dragoneyes, Eona is caught in the middle of a rebellion, both figurehead and target. Only one man can teach her how to use her new powers in time to save the empire: Lord Ido, the disgraced Dragoneye who engineered his fellows’ downfall, currently held captive by the wicked false Emperor Sethon. In an epic struggle for survival, Eona must rescue her enemy, master her abilities, and unlock a centuries-old mystery involving her own ancestor. This fascinating sequel to Eon combines Chinese myth, wuxia action, magic, romance, and gender issues, producing a densely-packed, richly-told story.