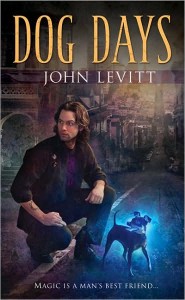 Meet Mason. He’s a musical prodigy with a talent for improvisation, and a definite skill when it comes to performing magic on the fly. But ever since he quit being an active part of the magic game, he’s been content to fly under the radar, playing his guitar as a jazz musician. It’s just him, his music, and Louie, his dog. Sort of. See, Louie’s actually what the magical community refers to as an Ifrit, mysterious spirits who masquerade as animals and serve as familiars to certain lucky practitioners. At any rate, things are quiet . . . for the moment. And then the attacks begin. Strange magical attacks that seem aimed at either getting Mason out of the way, or at least testing the limits of his skills and abilities. Before he knows it, Mason’s been dragged right back into the thick of the magical community, working with old friends once again. It seems he’s not the only person to have been attacked lately. Worse yet, there’s already been at least one death.

Now Mason, along with his colleagues, must unravel a deadly mystery affecting the entire magical community. Someone out there is gathering power in a highly unethical, unorthodox, and even unprecedented manner, and they’ve marked certain people, including Mason, for death. Can Mason figure out who’s behind the recent events before someone he cares for pays the price? One thing’s for certain: he’ll have to do what he does best. Improvise.

Dog Days presents a compelling magical mystery, filled with twists and some uncomfortable turns, as it follows a likeable new character through a mostly-familiar San Francisco. Levitt gives us a whole host of intriguing, complex characters to deal with, from the commitment-avoiding Mason to the to-good-to-be-true Sherwood, to prissy-yet-dangerous Victor, to the practical-yet-sexy healer, Campbell. The system of magic presented in this book is also intriguing; it’s relatively nebulous, yet accessible by simple virtue of being so individualized. Everyone’s a little different, and Mason’s talent is almost unique in its flexibility. Where else can you see someone cast a spell that uses the ambient cold, the smell of garbage, and the shape of a dog’s head, while making a fist? It’s hard to explain, but it’s nice to see a magic system that embraces the abstract while fully engaging the senses. Oh, and there’s one scene, midway through the book, where our heroes are engaged in a life-or-death battle against an unstoppable creature, and let me just say, I cheered at their solution, if just because it was common-sense, unexpected, and brilliant under the circumstances. It’s nice when characters surprise you.

I thoroughly enjoyed Dog Days. It’s proof that there’s still a heck of a lot of potential for variation in the urban fantasy genre, and it’s a highly satisfying read. I’m looking forward to the next in the series, especially if we’ll continue to see more details about the world the characters live in, their history, and just what’s up with the Ifrits. We get just enough to work with this time around, with plenty of questions left for another time. Dog Days is an excellent start to a promising new series.