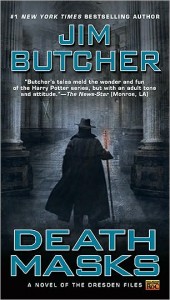 “They don’t make morgues with windows. In fact, if the geography allows for it, they hardly ever make morgues above the ground. I guess it’s partly because it must be easier to refrigerate a bunch of coffin-sized chambers in a room insulated by the earth. But that can’t be all there is to it. Under the earth means a lot more than relative altitude. It’s where dead things fit. Graves are under the earth. So are Hell, Gehenna, Hades, and a dozen other reported afterlives.

“Maybe it says something about people. Maybe for us, under the earth is a subtle and profound statement. Maybe ground level provides us with a kind of symbolic boundary marker, an artificial construct that helps us remember that we are alive. Maybe it helps us push death’s shadow back from our lives.

“I live in a basement apartment and like it. What does that say about me?

“Probably that I overanalyze things.”
— Death Masks by Jim Butcher

Once again, Harry Dresden’s in trouble. You’d think that Chicago’s only openly practicing wizard and private investigator would catch a lucky break now and again, but where Harry’s concerned, a lucky break means paying last month’s bills next month, and surviving to see morning. His girlfriend’s still a partial vampire, not fully transformed. The Red Court of vampires is still willing to wage war against the entire White Council of wizards if it means getting Harry’s head on a platter. Half his friends are avoiding him like the plague, and the other half are the ones he can’t trust anyway. Luckily, a job comes along.

Find the missing Shroud of Turin, an item charged with enough mystical and religious significance to set off an (un)holy war over it. But Harry has barely even taken the case when the hitmen start coming after him. And that’s just the beginning.

For starters, the Red Court’s representative, the dreaded Paolo Ortega, is in town to issue a formal challenge to duel Harry. At stake: the future of the vampires and wizards, a war that may leave no winners. Susan, his ex-girlfriend, turns up on his doorstep, packing heat, a partner, and some strange new secrets and powers. The demonic Order of the Blackened Denarius is also after Harry, a group of creatures possessing unthinkable power and older than mankind itself. Then there’s the ritually killed, unidentifiable corpse found by the Chicago PD, who naturally want Harry’s advice.

Take one unexplained death, one missing Shroud, and way too many enemies, and Harry’s in deep … trouble. But for once, he’s got right and might on his side in the form of the three Knights of the Cross, one of whom, Michael Carpenter, is one of those few friends Harry can always count on (even if Michael’s wife, Charity, hates him with a passion). You think you have it bad? Try being Harry Dresden for a few days. The stakes have never been higher, as Harry’s success could mean the difference between life and death for thousands, even millions … and all he has to do is ignore the prophecy that states quite clearly that if he seeks the Shroud, he will die. A prophecy coming from one of those sources it doesn’t pay to ignore….

What can I say about Death Masks that I haven’t said about the first four books in the Dresden Files series? Jim Butcher is clearly an old-school sadist, putting his hero through the crunch once again, systematically parting Harry of all his best resources and even threatening the sanctity of the Dresden Duster itself. Harry’s increasing desperation and exhaustion is palpable. He’s a sympathetic character, capable of victories and failures with equal frequency, and married to a white knight complex that will get him killed at this rate. One thing I love about this series is that it’s a sure thing. I know that each book in the Dresden Files is bound to be exciting, imaginative, complex, and surprising. The plot twists never seem obvious until they’re smacking you in the face, partially because Harry’s own sensibilities play at such odds with his opponents, and his solutions are sometimes as creative as MacGyver’s, if not as implausible.

Furthermore, there’s a growing sense of the larger plan. Five books in, and for every few answers we get, there are hints of something far bigger, as the world expands beyond the Chicago metropolitan area, and Harry is forced to think on a larger scale. We begin to see that vampires plot in terms of decades or centuries, that wizards are as powerful as they are self-absorbed, that the Fey are truly alien creatures in thought processes, and that some things really are on a divine/profane level. The continuing mystery of Harry’s parentage is another ongoing plot, with tidbits dropped in here and there, just enough to whet the appetite and make one suspect that Jim Butcher has it all planned far in advance.

Butcher, too, is improving in leaps and bounds as he continues to gain that writing confidence. I suspect that after five books, and a rabid fanbase, he really does feel comfortable in planning stories for the future. That, and he’s not afraid to make us sweat. There’s one scene between Harry and Susan that’s more electrically charged, more intense, than an entire book of Laurell K. Hamilton’s Anita Blake series.

Intense and wild, Death Masks is another roller-coaster ride from Jim Butcher, a skillful blend of urban fantasy and noir, sure to satisfy any fan and leave them begging for more. Even in that subgenre of “fantasy P.I.s”, (such as Glen Cook’s Garrett series, or Simon R. Green’s Something from the Nightside), it stands out as an exemplar.