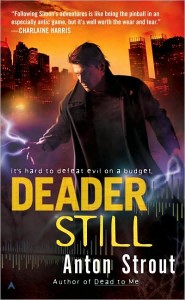 As an agent for New York’s Department of Extraordinary Affairs, Simon Canderous is used to all sorts of weird things, from killer books to evil cultists to unquiet apparitions. But even he has a lot to learn, as he discovers in his latest case. It all starts with a pit full of magically-conjured rats, courtesy of a Department test gone awry, and escalates after an entire boatful of bloodless lawyers turns up. (Go ahead, cue the lawyer jokes.) But what looks like the first vampire incursion in 737 days may just be something weirder, and far more personal, as more facts turn up.

As Simon tries to get to the bottom of things, his private life is thrown into chaos by the arrival of an unwelcome face from his criminal past, an ex-colleague who wants his help in one final heist. But her presence only serves to further destabilize Simon’s relationship with his girlfriend Jane, an evil cultist turned Department agent in her own right. Can he fight evil, steal a painting, battle zombie hordes, and still keep the girl, or will he wind up dead in a madman’s revenge-fueled artistic death trap, all before the paperwork on the vampire case dries? And just what’s bothering Simon’s partner, Connor? It’s days like this when Simon needs a raise. Or a safer job.

I’m really upset with Anton Strout: Deader Still is such a fast-paced, engaging, entertaining book that the pages seemed to fly by far too quickly. Take the New York of Men in Black and Ghostbusters, inject the same pop culture awareness and irreverence of Buffy the Vampire Slayer or the Middleman, toss in a little Thomas Crown Affair, shake and stir, and you’ve got something fairly close to this book. Simon’s a believably accessible protagonist, who makes the same sort of mistakes we can all sympathize with, and his point of view really brings the right sort of life to the setting. There’s something inherently amusing in watching our heroes struggle with yards of bureaucratic red tape while trying to authorize replacement cell phones because the old ones were melted by accidental magic, or having a whiteboard in the office that counts off the days since the last vampire incursion, or good old-fashioned departmental in-fighting. There’s something weirdly satisfying in the mixture of killer art, books that attack, secret organizations that recruit at comic book conventions, and old-school revenge-driven evil masterminds.

I have to admit, I love the couple of Simon and Jane. He’s a former thief/con man turned government agent, she’s an evil cultist (in it mainly for the benefits package) turned researcher, and they’re an adorable couple when they’re not spatting. I dare say they could become the Nick and Nora Charles of the DEA, given the time and opportunity. Anton Strout has taken his influence from a wide array of cultural influences (I swear I detected a hint of Blues Brothers in there), and the end result is a cheerfully esoteric urban fantasy that blends humor and adventure in equal doses. I’m just sorry I finished Deader Still so quickly, as now I’ll have to wait for more. Really, this is good stuff, and a great read. I’d very much like a lot more where this came from.