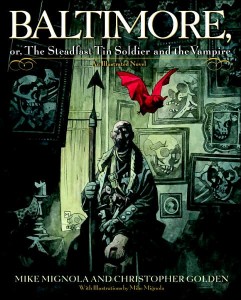 In the darkest days of World War I, Lord Henry Baltimore, then a Captain in the English Army, watches his men fall in battle. Himself injured, he barely fights off a nocturnal predator, and in doing so, unleashes the unholy wrath of a vampire, and sparks a disturbing plague across Europe.

Years later, as the plague ravishes the continent, three of Baltimore’s closest allies — Captain Demetrius Aischros, Doctor Lemuel Rose, and Mister Thomas Childres, Junior — are summoned to a lonely, foreboding inn where they are to await Baltimore’s arrival. There, surrounded by the stench of death and those waiting to die, the three men trade stories. One by one, they fill in the vital gaps in Baltimore’s history, each man having encountered Baltimore at some point or another, quickly realizing that their old friend and colleague has changed, and not for the better. One by one, they relate eerie stories of their encounters with the horrific and the supernatural, the experiences which made them ready to believe Baltimore’s grim story of vampires and evil stalking humanity. And then, as they learn more of Baltimore’s obsession and hopeless quest to rid the world of the vampire which cursed him, they’re drawn into an epic struggle for survival, one which will leave them changed forever.

Baltimore is a spooky, atmospheric, Gothic series of interwoven tales that’s sure to make an impression upon the reader. From the nightmarish, disjointed beginning among the bloodsoaked trenches of World War I, to an inn haunted by the barely living, to the violent, heartbreaking conclusion, it paints a gruesome picture of the darker corners of the world. It actually invokes an old, time-honored storytelling convention, that of the group of people sitting around swapping their own tales, something which could easily become tiresome, were it not handled by such a skilled creative team. Sin trees, evil giant puppets, vampires, lake-dwelling abominations, a disgraced priest, cursed soldiers and vengeful spirits all have their parts to play here, interspersed with imagery and quotations drawn from the titular fairy tale, “The Steadfast Tin Soldier.”

At first, I was dubious about this book. Christopher Golden is an excellent writer with a mastery of dark fantasy and horror, while Mike Mignola, best known for his Hellboy comics, has a unique visual style, but this seemed to be something of an experiment for them both. The prologue, in which Baltimore meets his supernatural nemesis, is not the easiest part of the book to get through, but upon reflection, it really does capture the bloody, vicious, haunting moment in style. However, it was my biggest stumbling block in getting into the story. Once we were introduced to the Surgeon, the Sailor, and the Soldier (as the chapter headings address the three) and their stories were allowed to unfold, I was swiftly drawn into the narrative. Each man gets two stories: one dealing with his experiences with Baltimore, the other with a previous encounter with the supernatural, and in that manner, I was reminded of a bizarre modern-day invocation of the Canterbury Tales. The stories are imaginative, memorable, and disturbing, as the men speak of the evils they’ve survived (for there’s very little vanquishing to be found here), and drawn from from various cultural influences to make for a wide-ranging tapestry. Baltimore’s own narrative, told in the form of diary entries, is just as chilling in its own way, as he attempts to rid the world of vampires. Festooned with guns and swords and other weapons, his wooden leg covered with nails to symbolize his victories to date, he’s an ominous, imposing hero, a vampire hunter who would make one hell of a visual for a film or animated feature, especially when given the opportunity to cut loose in battle.

Mignola’s artwork is liberally splashed across the pages throughout the book. It’s a unique visual style, moody and bleak, relying on heavy use of shadows to suggest, rather than show through details. I wish there had been more full-page pieces, for many of the smaller images which serve to amplify the words on the page are simply too small, and don’t satisfy the imagination like the larger ones do. One full-page depiction of Baltimore himself in shadow is quite stunning indeed.

Golden and Mignola make a good team, as witnessed by their previous collaborations (Golden’s written a few Hellboy novels) and Baltimore is certainly a success for them both. It may have its flaws, but all in all, once I got into it, I couldn’t stop reading, eager to find out what manner of twisted horror would be thrown at the characters next, and whether they’d see a victory over the vampires terrorizing the world. All I can say that for these men, a happily ever after isn’t entirely on the books, even if they do survive the final encounter. So despite my initial hesitations regarding this book, I’m happy to say that Baltimore is well worth checking out, especially if you happen to like your stories dark, disturbing, and Gothic.