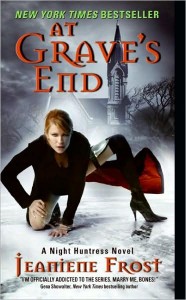 As usual, Cat Crawford has problems. Her mother disapproves of her vampire lover, Bones. Her father is an evil scumbag who deserves a long, slow, painful death. Her identity has been exposed to the vampires she hunts for the government, and now they’re hunting her in return. And most annoying of all, Bones has gotten himself involved in some heavy-duty vampire politics, with Cat at his side, and things are about to get monumentally, memorably messy. Is Cat about to suffer a tragedy even she can’t recover from?

There’s a traitor amongst her circle of friends and allies, and if she can’t figure out who’s selling her down the river, there’ll be Hell to pay. But is it Vlad, the charming basis for the most infamous vampire novel of all time, or Doc, who made a name for himself in the Old West, or Annette, who used to care for Bones in her own way? Or is it Tate, the soldier-turned-vampire, who’s never made a secret of his hatred for Bones? There’s no shortage of suspects, and time is running out, even as an ancient vampire plans bloody vengeance. . . .

At Grave’s End continues the adventures of Cat Crawford, half-vampire who hunts renegade bloodsuckers, and Bones, the full vampire who won her heart and taught her how to embrace her nature. As their romance thrives and blazes, they have to deal with all sorts of threats, leading to a nonstop series of action-packed incidents. We get to see even more of the vampire world and its politics here, and it’s never dull. Jeaniene Frost tosses in a few amusing cameos, historical figures turned immortal creatures of the night, and it adds some nice additional color to the atmosphere. As always, the action scenes are dynamic and easy to visualize, and the physical moments between Cat and Bones practically sizzle with passion.

This is a series that never fails to engage and entertain, and At Grave’s End is another treat for those who like vampire-centric urban fantasy. And once again, I have to give a special mention to the gorgeous, eye-catching cover by Thomas Egner, which tells a story in its own right.