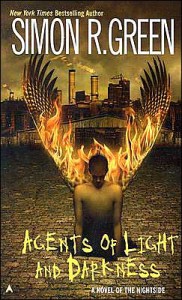 John Taylor, the Nightside’s scariest private investigator and finder of lost things that really, really want to stay lost, is on the case once more. This time, he’s been hired by a man named Jude, a representative of the Vatican, to recover something that’s gone missing. The Unholy Grail. The cup Judas drank from at the Last Supper. A blasphemous, evil artifact of pure nastiness. Even the merest whisper of its existence is enough to make the mystical beings that inhabit the Nightside, London’s seedier, uglier, crueler, magical side, close up shop and head for the hills. All it takes is a single misplaced hint, and the forces of Heaven and Hell are in town, and not a one of them cares who gets hurt or what gets in their way.

Everyone wants the Unholy Grail, and they all want John Taylor to find it for them. Or they want him dead so he can’t find it for the other side. Really, they’re not picky. For a job this big, John’s going to need help. Help like Shotgun Suzie, the nastiest bounty hunter around, too hard-core for Kali cultist and too violent for impolite company.

Now John and Suzie just have to bust heads and take names as they carve a swath of destruction of their own through the Nightside, before Heaven, Hell, or the Nightside’s own Powers That Be decide to pull the plug on the whole operation. They’ll cross exiled demons, the world’s most dangerous boy band, Nasty Jack Starlight, Razor Eddie, Nazis, La Belle Dame Sans Merci, the infamous Collector, and their own worst fears before the job is over and done with, and the Nightside may never fully recover.

Pure and simple, Agents of Light and Darkness is another Simon Green adventure of over-the-top action, mad concepts, and good old-fashioned mayhem. Written like a campy horror-action movie, fast-paced and high-octane, it’s the perfect way to spend a couple of hours. The characters are outrageous, the ideas are brilliant in their throwaway oddness, and the plot has just the right balance of gruesome seriousness and dark humor. Look closely, and you’ll even see lines connecting this series to some of his other works, including Shadow Falls, Drinking Midnight Wine, and the Hawk and Fisher series. I can’t recommend Green’s work enough.