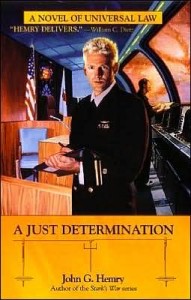 Ensign Paul Sinclair has just been assigned to the USS Michaelson, his first posting as an officer. Armed with several years of Academy training and specialized schooling, he’s surprised when his lone legal course qualifies him to be the ship’s legal officer, a role he’s none too eager to play. He’s got enough on his plate as it is, trying to get the hang of things aboard ship in the Navy of the future, without trying to worry out legal ramifications for complex situations. And a very complex situation’s been dropped into his lap, when the Michaelson is ordered to patrol American interests in space, and to enforce the sovereignty of said interests, doing whatever it takes. With disturbingly vague orders comes a disturbingly vague ship’s captain, Pete Wakeman, whose mental stability seems to be in question.
After the unthinkable occurs, and the Michaelson fires upon, and destroys a civilian research ship belonging to another country, Paul is forced to put everything he knows and believes in into perspective. The Michaelson is recalled home, Wakeman to stand trial for his actions as captain, and Ensign Sinclair must decide what version of the truth to go with. His testimony could do more than help the captain he doesn’t trust, it could make or break his career as well. But going with his heart may cost him all of that.
The characters, situations, and moral dilemna all reminded me strongly of a Heinlein juvenile, such as Space Cadet, or even William Forschten’s more recent Star Voyager Academy series. It’s almost deceptively simple on the surface, but the further you dig, the more there is to consider. Clearly the first in a new series, A Just Determination is proof that Hemry’s an author to keep an eye on.